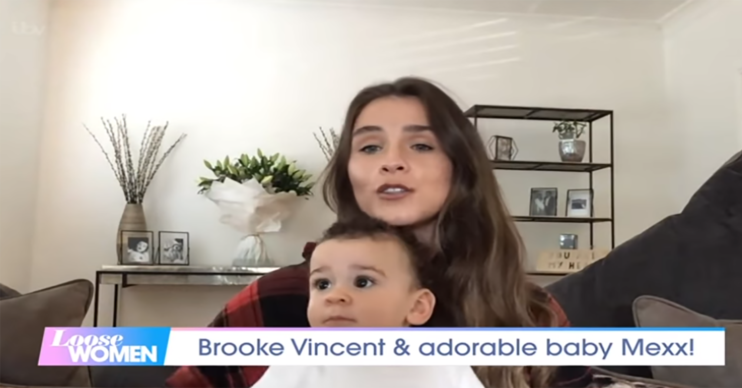 Little Mexx certainly knows how to play up to the camera!

Brooke Vincent melted the hearts of Loose Women viewers as she appeared on the show alongside her baby son Mexx.

The 28-year-old Coronation Street actress appeared on the ITV show with her son via video-link today (August 31).

However, little Mexx clearly had other intentions as he wiggled in Brooke’s arms throughout the chat.

During the interview, the adorable tot demanded attention as he tried to escape his mum’s grip.

He even attempted to climb over the sofa before the soap favourite grabbed him back.

As Brooke struggled, Andrea McLean said: “If he wants to go, you can let him go. Brooke, who else is there? Who have you got?”

The actress later gave Mexx to a family member to be cared for.

What did Brooke Vincent say?

With Mexx out of sight, Brooke opened up on the pressures of bouncing back into shape after welcoming a baby.

Speaking to panel, she said: “A lot of my friends have had children in the past and I kinda think it wasn’t spoken out.

“I didn’t know you had your baby and it takes you however long to get back into your jeans.”

Brooke later added: “You just assume your stomach is going to go down because the baby is out.”

It certainly isn’t the first time Brooke has opened up on her post-baby body.

Last year, the ITV star shared an honest post with followers ahead of a planned date night with boyfriend Kean Bryan.

Alongside a shot of herself in pyjamas, Brooke said: “So this was so important for me to say, for all the women who think they should look, act or feel a certain way after a baby DONT! Don’t beat yourself up.

“Do you & if 4/6/8weeks or even a year after giving birth you don’t fit in your old clothes don’t worry, you can always join my club.

It’s important to be honest because being a new mummy is daunting enough!

“It’s important to be honest because being a new mummy is daunting enough!”

She added: “The most important thing is me & Mexx are healthy & happy and as soon as my baby boy looked at me, I realised he doesn’t care if i fit in my old jeans or not .. So I guess creased watermelon PJs & slippers for now it is.”

When is Brooke Vincent returning to Coronation Street?

Brooke is currently on maternity leave after giving birth to son Mexx in October.

It looks unlikely the star will reprise her role in the near future because she is concentrating on motherhood and her stationery business Oh So B.

In response to a fan who asked if she is returning to Corrie, she wrote on her Instagram Story: “Not just yet, I’m really enjoying being a mummy to Mexx and concentrating on @ohsobofficial but Corrie is my home and I miss so many people there.”

She also previously admitted she was unsure about her return date because she “didn’t take typical maternity” leave.