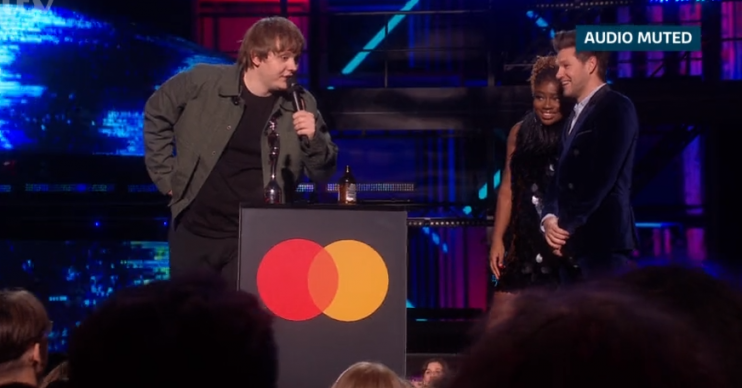 Viewers are demanding to know what Lewis Capaldi said during his speech at his first BRIT Awards last night.

The Scottish superstar won the first prize of the evening, New Artist of the Year, and knocked back his bottle of booze after the crowd at The O2 in London dared him to “down it”.

As he got up on stage, Lewis gave a brief speech but it was muted leaving confused viewers trying to work out what he said.

It’s since been revealed that the Someone You Loved hitmaker simply said: “Thank you very [expletive] much see you in a bit goodnight.”

Viewers took to Twitter to ask why his whole speech was muted.

What did Lewis say? They muted it? How rude!

One person said: “Why was Lewis Capaldi’s speech muted??”

Another asked: “What did Lewis say? They muted it? How rude!”

A third tweeted: “Someone at ITV muted Lewis Capaldi wtf.”

What did Lewis say, they muted it?How rude! #Brits 🙈😒

What did Lewis Capaldi say? #BRITs

The win came shortly after Lewis belted out his huge hit Someone You Loved.

He had earlier admitted he hates performing on TV ahead of his BRIT Awards set.

The Hold Me While You Wait hitmaker was feeling really “nervous” ahead of his performance at the prestigious ceremony at The O2 on Tuesday evening.

He told Clara Amfo on on BBC Radio 1: “I wish I wasn’t performing. I hate performing on TV. I get very, very, very nervous. We will see how I will get on. Try and get through it as quick as you can.”

Lewis also jokingly called his pal Sam Fender – who was also up for New Artist – Voldemort from Harry Potter after he beat him to the Critics’ Choice award in 2019.

He quipped: “I am sour [jokes]. He is the Voldemort of my life. If I catch that man’s eye, there will be fireworks. Angry fireworks. We will come to blows I am sure. If you see Sam, I am looking for him.”

Meanwhile, the singer was the big winner at the BRITs after scooping New Artist of the Year and Song of the Year for Someone You Loved.