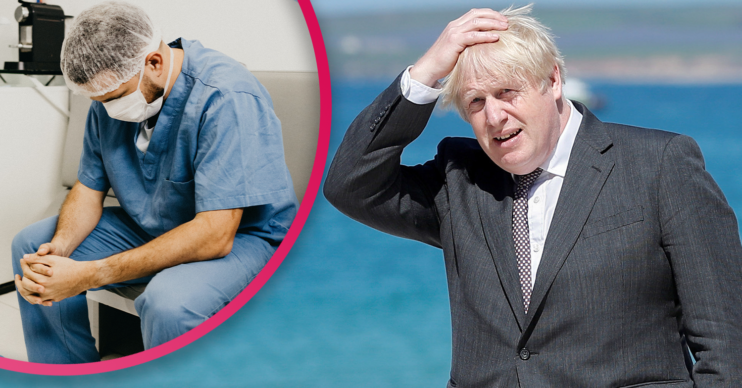 Boris Johnson news: PM slammed over ‘insulting’ thank you to the NHS on its 73rd birthday

He's been at a service of thanksgiving today

Boris Johnson and the NHS are both in the news today, but sadly for the PM it isn’t for the right reasons.

A service of thanksgiving took place at St Paul’s Cathedral earlier today, with Boris – and Prince William – among the attendees.

However, as Boris headed into church, Brits were slamming him on Twitter for his “insulting” post to NHS workers on the eve of the anniversary.

Boris Johnson news: What did he say about the NHS?

Boris shared several pictures on Twitter which showed him meeting NHS workers, volunteers and charity workers on what he called “Thank You Day”.

He said: “This evening I had the opportunity to meet and thank some of the fantastic people who have gone above and beyond to support others throughout the pandemic, including NHS workers, volunteers and charity leaders.”

Read more: After Matt Hancock’s affair with his aide, just what is the appeal of men in power?

And, while one person praised the PM, others weren’t as pleased.

“A thank you goes a long way and these hard-working NHS workers, volunteers and charity leaders would have been very humbled to have received your thank you in person,” said one Boris fan.

However, it’s fair to say not everyone felt the same.

This evening I had the opportunity to meet and thank some of the fantastic people who have gone above and beyond to support others throughout the pandemic, including NHS workers, volunteers and charity leaders.
#ThankYouDay pic.twitter.com/c3EvkUm6Ei

‘This is an insult to the brave people of the NHS’

“‘Humbled?’ No, this post is an insult to these brave people many of whom work in the NHS and have been denied a pay rise while this government has lied, broken rules and squandered money,” said one.

Another said: “‘Humbled?’ On what basis do you say that? What would your response be if, at the end of the month, rather than being paid your boss said thank you instead?

“They need a proper pay rise. All those I asked yesterday, and last week, in a central London hospital take that view.”

Others asked Boris directly when NHS staff would get the “pay rise they deserve”.

“Did you discuss the 1% pay rise you gave them?” asked one.”I’m sure they were very grateful.”

“So where is their pay rise?” asked another.

“Where is your commitment to – and investment in – public NHS services?” they continued.

Nothing more than a ‘photo op’ for Boris

“Not impressed BoJo! This is just another photo op, giving you the chance to dress up and pretend to be involved with people,” another declared.

“In my honest opinion you don’t give a damn about people. This is just image management for you!” they added.

“They don’t want your insincere thanks, they want a decent pay rise,” declared another.

“Give the NHS workers a decent pay rise above inflation then. You would think that the NHS saving your life would generate a bit more gratitude than you have shown so far,” another concluded.