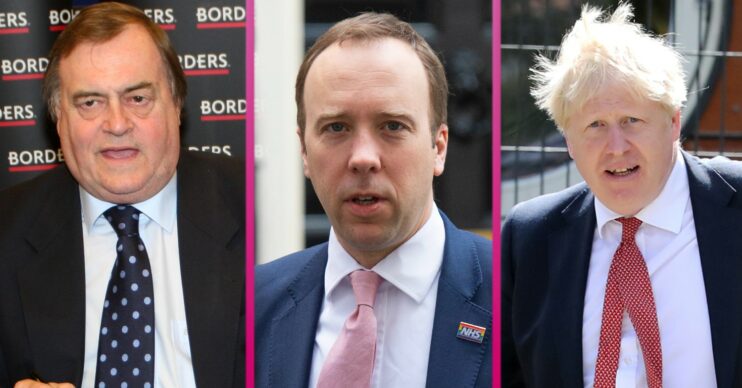 He is sadly one of many!

Matt Hancock has been caught kissing his closest aide amid rumours of an extramarital affair.

Hancock, 42, has been photographed on CCTV in a passionate embrace with advisor Gina Coladangelo, 43.

So far the MP has said of the accusations: “I have let people down and am very sorry.”

And his wife, Martha Hancock, 44, has been photographed leaving their London home still wearing her wedding ring.

While it is indeed a scandalous story, you wouldn’t be wrong for thinking we’ve seen the likes of this all before as many a British MP has been caught up in similar allegations over the years.

Yes, our current Prime Minister Boris Johnson is believed to have strayed a fair few times.

Before he wed current wife Carrie Symonds, he was married to his second wife Marina Wheeler for over 25 years.

During their marriage, he had at least one confirmed extramarital affair as he had a love child with property developer Helen Macintyre.

Helen gave birth to their daughter, Stephanie, in 2009.

What’s more, he is rumoured to have multiple other affairs.

Perhaps the most well-known allegations are from American businesswoman Jennifer Arcuri.

She claims that they had a four-year affair and even shared a selfie of herself in what she claims was Boris and Marina’s then marital home.

Boris has not ever directly addressed his rumoured affairs to the public.

However, an Independent Office for Police Conduct (IOPC) investigation into his dealings with Jennifer did confirm the pair had an “intimate relationship”.

Piers Merchant was a Tory politician and MP who was forced to resign following a sex scandal.

In 1997, photos were published of him by The Sun that showed him during a “sex romp” with a nightclub hostess and researcher aged just 17.

He stepped down as an MP that year. In 2004, he reemerged and stood for UKIP in the 2004 European Parliament election, but he was not elected.

In September 2009 he died aged 58 from prostate cancer.

His loyal wife Helen stayed with him up until his death but admitted he’d been a “bloody fool” when the allegations emerged.

Labour MP John Prescott appears to be quite the ladies man – as well as a big fan of Jaguar cars.

He’s been married to his wife Pauline Tilston since 1961.

But he’s admitted to having had an affair with his former diary secretary Tracey Temple from 2002 till 2004.

For years there were also rumours that he had a love child.

Yet it was eventually uncovered that it was his wife, Pauline, who had had a child (with someone else) prior to marrying John and the baby had been legally adopted.

It was later reported that she reunited with her son in 2003.

Former MP and now Lord Blunkett was exposed as having an affair and love child with a married woman.

Although David was single at the time, having divorced his first wife in 1990, his three-year affair with Kimberly Quinn was exposed in 2004.

It was later revealed through a DNA test that her eldest son was David’s child.

She gave birth to a second son in 2005, but the DNA results proved that the father was not David.

David already had three sons from his former marriage.

In 2016, then Labour MP Keith Vaz quit his role after he was accused of “hiring male prostitutes” and allegedly “offering them cocaine”.

The married MP was “exposed” by the Sunday Mirror who published alleged voice recordings of his encounter with the sex workers.

Keith subsequently released the following statement: “I am genuinely sorry for the hurt and distress that has been caused by my actions in particular to my wife and children.

“I will be informing the Committee on Tuesday of my intention to stand aside from chairing the sessions of the Committee with immediate effect.”

Former Tory MP David Mellor was exposed as having an affair with actress Antonia de Sancha in 1992.

She told her kiss-and-tell story to The Sun and this included secret phone conversations with David.

Prime Minister John Major supported him at the time, but David was subsequently forced to resign after accepting a month-long holiday to Marbella from socialite Mona Bauwens.

The affair apparently lasted from 1984-1988 while they were both married to other people.

She says she was deeply in love with John but they ended their relationship because it had become too “dangerous”.

Shortly after the book was released, John made a public statement apologising for his indiscretions.

Paddy Ashdown was an MP and leader of the Liberal Democrats from 1988 to 1999.

The Sun exposed him as having a five-month affair with his secretary Patricia Howard and the tabloid nicknamed him “Paddy Pantsdown”.

Despite his affair, he remained married to his forgiving wife, Jane Courtenay. Paddy died aged 77 in 2018 from bladder cancer.