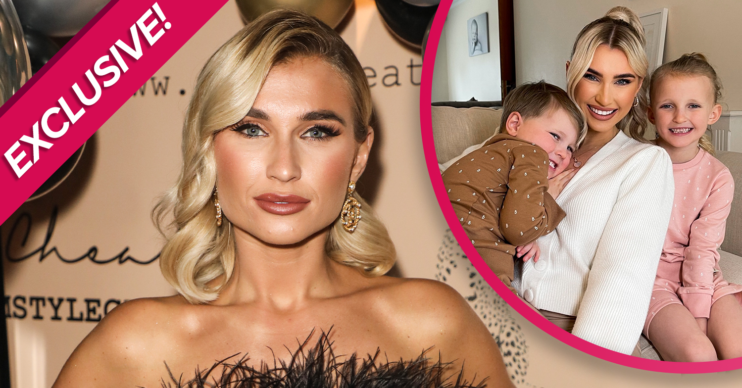 She's a 'little bit nervous', though!

Billie Faiers has revealed she’s return to Dancing on Ice this Sunday (March 14).

The Mummy Diaries star left the competition after suffering concussion, which she revealed took it out of her “for a good week”.

Now, speaking exclusively to Entertainment Daily, Billie has revealed that she’s lacing up her skates once more with partner Mark Hanretty.

And, while she’s “really excited” about her Dancing on Ice return, Billie admitted she is also “a little bit nervous” about skating again.

What did Billie Faiers say about the Dancing on Ice final?

ED! spoke to Billie – mum to Nelly, six, and Arthur, four – earlier this week as she launched her spring/summer kidswear range for George at Asda.

Spilling the beans on this weekend’s finale, Billie said all this series’ past contestants have been invited back to skate as part of a “montage”.

Read more: Five crises this series of Dancing on Ice has had to face

She heads back to training with Mark on Friday and said she hopes she hasn’t “forgotten how to do it”.

Speaking of the injury that knocked her out of the competition, Billy confirmed she feels “absolutely fine now”.

“I had concussion, it took it out of me for a good week, I just didn’t feel myself.

“But I’m really excited because I’m going back to training on Friday with Mark so I’m going to be in the finale which I’m really happy about.”

Billie Faiers ‘so gutted’ to leave Dancing on Ice

Speaking about her departure after performing just one routine, Billie admitted: “I was so gutted.

“You put so much hard work and time into it and I was so upset for my dance partner Mark.

“It’s just one of those things. I was really upset for a couple of weeks but you have to move on from it. When you take part in that show, sometimes these things happen.”

Billie has previously missed a week of the show after her beloved Nanny Wendy passed away. Yesterday, it was reported that her grandfather Mick had sadly died.

In this weekend’s final, Billie said: “I think we all do a 15 or 20-second bit of our first dance, so it’ll be like a montage I think.

“But I’m really happy that it gets to end on a high, rather than how it did for me.”

As for who she wants to win, Billie is backing he told pal Sonny Jay.

“It’s such a difficult one because they’re all amazing, but I’ve known Sonny for years so I’d love Sonny to be in with a chance.”

By George, it’s her new collection!

Away from the ice, Billie has been busy homeschooling daughter Nelly, who models the latest George at Asda range alongside her little brother Arthur.

“I put everything on a little rail and the kids were picking out what they wanted to wear. I do it in a way where they’re in control,” Billie explained.

I have to do the Nelly test because she’s the fussiest child ever. So if it’s got her approval then I think all children will like it.

“Nelly was hilarious, she actually done a talk through of the rail. Obviously she sees me doing these things. It really made me laugh.”

When it comes to the clothes, Billie said that she carries out the “Nelly test”.

“I have to do the Nelly test because she’s the fussiest child ever. Everything has to be loose and comfortable and non-itchy. So if it’s got her approval then I think all children will like it,” she said of her new collection.

Billie most certainly has her hands full and admits she’s pleased the kids are now back at school.

Next up is her house-building project with husband Greg Shepherd, and she admitted the stressful experience has already had them “bickering”.

“It’s a big project,” Billie explained of the house build. “It’ll be a year till we can move in there.”

Speaking about her hubby, Billie admitted: “I can already see there are going to be a few disagreements along the way.

“The other day he mentioned something to do with the layout of the kitchen, then we started bickering about it.

“I was like: ‘Hold on a minute, this is my area, can you stick to the outside or the garden.’

“It’s inevitable we’re going to disagree on things. But we are lucky because we’re staying in the house we’re in while we’re renovating it.”

How Billie deals with trolls: ‘Delete and block’

The couple did come under fire when news of the build was revealed, but Billie doesn’t let trolls get her down.

“We’re in the public eye, it’s to be expected, everyone has an opinion. I don’t take much notice of the comments. I never read them, why would you do that to yourself?” she said.

“If I ever get any negative comments I just delete and block them. I never respond. I just think that’s what they want. I just have to try and block it out.”

Billie’s eighth childrenswear collection for George at Asda launches at George.com on March 19. The collection features styles for babies and children up to 7-8 years and starts from £4.