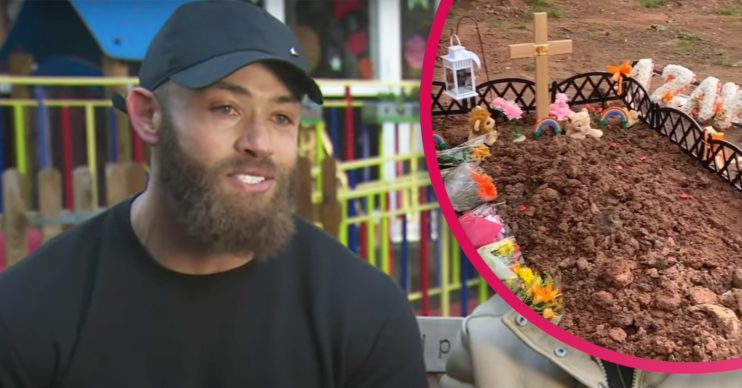 Such a sad time for Ashley and girlfriend Safiyya

Ashley Cain has been seen tidying daughter Azaylia’s grave, which is adorned with flowers and lion teddies.

The reality TV star got all of his family involved the task, and shared videos with his Instagram followers.

Azaylia died in April after a brave battle with a rare form of leukaemia.

And, at her funeral earlier this month, Ashley made a truly emotional speech – which he has now shared online.

What did Ashley Cain say about daughter Azaylia?

It’s adorned with flowers and lion teddies, as well as a wreath spelling out her name.

Sharing his video, Ashley wrote: “Goodnight princess. I love you.”

She also shared a video and said: “My baby. I love you.”

What did Ashley Cain say in his funeral speech?

Ashley said Azaylia changed, saved and made his life as part of his heartfelt speech.

He said: “Wow, I always thought I was a bit of a celebrity, then Azaylia came along, completely blew me out of the water.

“I think that when you have a child, as a parent, you can be slightly biased, but I think it is safe to say, on behalf of myself, my partner, to my friends and family and the whole world who have followed our story, that my daughter, Azaylia Diamond Cain was special.

“Beautiful, strong, courageous and so, so inspirational. I don’t think that a single person in this room can say they are too wise, too educated or experienced to have learned something from my likkle lion.

“From the second she came into my life everything changed.

“She changed my life, she saved my life and she made my life,” he said.

Azaylia ‘allowed me to love’

Ashley added: “Having a little girl for me was a chance to really, really show the true person that I am.

Tragically, Azaylia was just eight months old when she died.