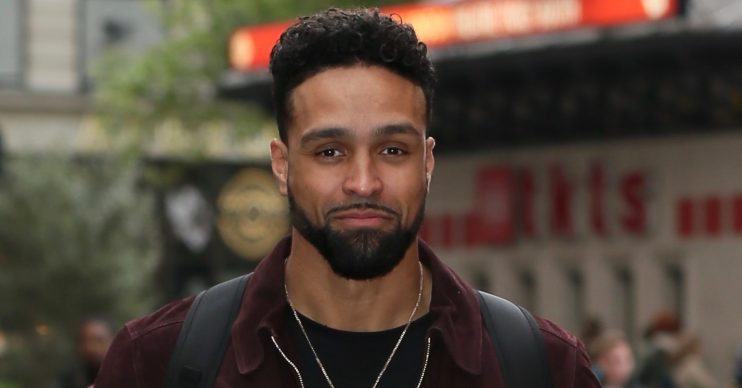 Ashley Banjo slammed by fans over photo with cute dog

Some people didn't like the way he was holding the pooch

It’s not often that Ashley Banjo receives backlash on his social media posts, but it seems his latest photo has riled up some people.

The Dancing On Ice judge shared a snap to Instagram this week showing himself holding his Diversity pal Perri Kiely’s pet Pug, Barry, while posing for the camera.

In the photo, Ashley, 30, is seen holding Barry with one hand under the dog’s stomach as he put his other hand in his pocket.

Ashley captioned the post: “It’s not quite what I had in mind when I asked for a doggy bag… #puglife.”

However, fans have criticised the way Ashley was holding the pooch with many saying Barry looked ‘uncomfortable’.

One person said: “Poor little pug you could at least hold him properly.”

Another wrote: “Poor dog… That can’t be comfy,” while a third added: “Poor little pug. You should hold him properly!”

Others gushed over the sweet picture.

Ashley’s brother Jordan Banjo commented: “Don’t think it’s what Barry had in mind when he thought he was having a glamorous filming day.”

One fan said: “Love this picture,” while another wrote: “Ashley Banjo and a pug it must be my lucky day.”

Ashley often shares photos of his own dogs Melvin and Oscar.

However, Oscar passed away earlier this year leaving Ashley and wife Francesca heartbroken.

Melvin has been a bit lost without his big brother @oscar_the_greatdane the past few days. And by lost I mean no one to steal from or push over amongst other things 😅 But I promised this crazy dog that we’d have our own set of adventures… Time is too precious with these big slobbery messes! #melvinthedane #whathashedonenow #foroscibear

Back in May, Ashley shared a sweet photo of his baby daughter Rose and his beloved dog Oscar.

The doting dad-of-one reminised about his pooch by posting a snap of Oscar meeting baby Rose.

In April, Ashley had shared the news with fans that Oscar had passed away.

At the time, he wrote: “RIP Oscar, we love you so much boy… @francescabanjo and I are completely heartbroken.

“The bravest, most loving and gentle soul we’ve ever known. There is a hole in our hearts that can never be filled.”