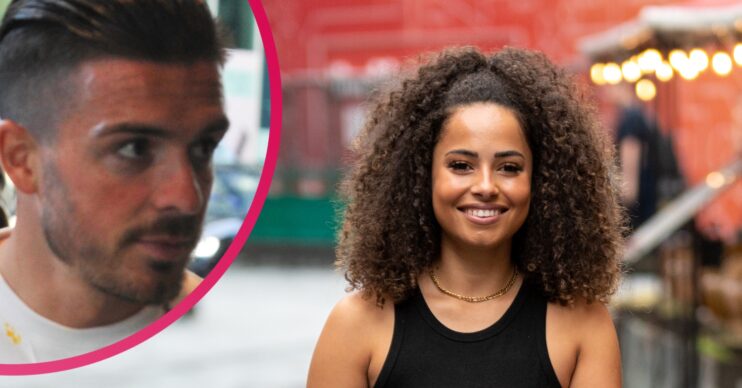 Things are getting complicated!

The footballer found himself in hot water after reports claimed he was dating Amber after enjoying dates with Emily Atack.

And things are getting more complicated by the day.

Read on to find out the latest – and try to keep up!

The Sun claimed Manchester City player Jack has been dating Amber after meeting her online.

Sources claimed Jack had left Amber ‘heartbroken’ after it emerged he had also been seeing Emily.

I really thought there was something between us.

An insider told the newspaper: “Amber and Jack have met up several times over the past few months, at hotels, including one in Leeds.

“She was clearly quite excited about it, she told her friends, but after the news about Jack and Emily came out recently the whole thing feels a lot less glamorous.”

Read more: Jack Grealish ‘besotted’ with Emily Atack and facing a decision to pick her or on-off girlfriend

However, Amber has now spoken out in an Instagram video.

Although she didn’t mention Jack, she spoke about relationships.

She captioned the clip: “You wanted to know who I was really dating. You’ll never find out because of this kind of [bleep] everyday. Stop lying!”

Meanwhile, she said: “Any relationships that I’ve got going on or any dating get ruined immediately by people going ‘This is who she’s dating now’ and I’m like ‘Hold on, am I?'”

What happened between Jack Grealish and Emily Atack?

Footballer Jack, 26, and Emily, 31, were linked a week ago after reports claimed they shared a secret liaison in Manchester.

The meeting at the five-star Lowry Hotel reportedly happened on October 18, when Emily visited Jack there.

She was staying nearby as she was touring with her live theatre show ‘Emily Atack Has Left The Group’.

The pair later met up at least once at Emily’s London home.

A source was quoted as saying: “They started DMing on Instagram before swapping numbers, and taking it on to WhatsApp and FaceTime.

“Jack’s been calling her almost every day and has been pretty open about it.

“They’ve become really good mates, are FaceTiming loads and he’s like a little puppy dog around her. It’s very sweet. They have a real laugh together.”

What about Jack’s model girlfriend Sasha?

While Jack’s been spending time with his famous ‘friends’ he does already have a girlfriend.

Pretty Little Thing model Sasha Attwood has been dating Jack on and off since they were 16.

In August, Jack was seen on Raya, the celebrity dating app.

But in September Sasha, 25, posted a message wishing Jack a happy birthday and celebrating their anniversary.

ED! has contacted reps for Jack, Emily and Amber for comment.