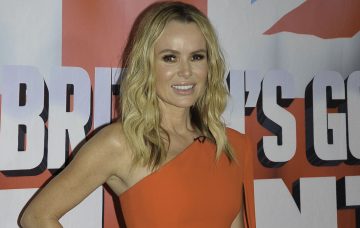 After over a decade of helping launch singing careers for others, Britain’s Got Talent judge Amanda Holden is kicking off her own.

The actress and TV star is said to be in the middle of a music bidding war, as major labels scramble to sign her.

Amanda is no stranger to singing, of course – in addition to her 12 years as a judge on Britain’s Got Talent, she’s a seasoned West End performer.

She was nominated for an Olivier Award for her performance in Thoroughly Modern Millie in 2004, and went on to play Princess Fiona in Shrek the Musical.

But her stage appearances aren’t behind the interest in a musical career – Amanda has social media to thank for that.

The actress posted a heartwarming video to Twitter and Instagram in December, showing just how talented she really is.

The video – posted to celebrate her 10th anniversary with husband Chris Hughes – shows Amanda and her two daughters singing the song Tightrope, from the movie musical The Greatest Showman.

A fantastic Daddy and husband. We made this little video for #TheGreatestshowman in our life to celebrate #10 years married and Chrispy’s birthday today. We’re sharing this with you too and wish you all a happy & joyous Christmas pic.twitter.com/Na3XCZdheB

The video was captioned: “A fantastic Daddy and husband. We made this little video for #TheGreatestshowman in our life to celebrate #10 years married and Chrispy’s birthday today.

“We’re sharing this with you too and wish you all a happy & joyous Christmas.”

The clip quickly went viral and now, according to The Sun, Amanda is preparing to record her first album, with several major labels interested in signing the star.

“The actress is the subject of the biggest music bidding war of the past year, with major labels Warner, Sony and Universal all trying to sign her,” he said.

He went on to say that the attention had come as a surprise to the actress, who is currently working on this year’s season of Britain’s Got Talent.

“While she’s currently busy focusing on filming BGT, she is seriously considering the very exciting offers.”

Would you buy Amanda’s album? Leave us a comment on our Facebook page @EntertainmentDailyFix and let us know what you think of  the site.