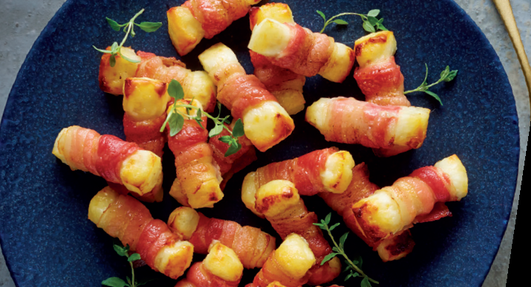 Our mouths are watering

Aldi has unveiled its Christmas food menu for 2019 – and one item has sent the internet wild.

The supermarket is selling halloumi wrapped in bacon as part of its new festive range, which was revealed this week.

You can’t get better than that, right?

According to OK! Magazine, the German chain have made the giant treat from 100% British meat and claims it’s “the ultimate pig in blanket” that can serve up to 10 people.

The red bevvie shimmers when you shake the bottle and is flavoured with peppermint and hints of vanilla.

They will also be selling their Christmas hampers again this year, which include a range of treats.

Aldi has created seven in total, ranging from an alcohol-free gift box at £19.99 to an Exquisite hamper priced at £99.99.

The hampers will be available to be delivered to households from November 13.

Aldi’s full Christmas range will be available across all UK stores soon.

What are you most looking forward to in the Christmas range? Leave us a comment on our Facebook page @EntertainmentDailyFix and let us know.