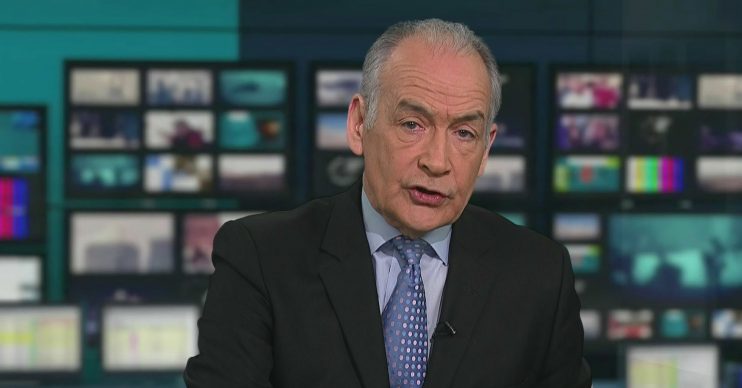 He said in a statement that he regrets his tweet

Fans have started a petition to get Alastair Stewart back on ITV after he quit over an “error of judgement” on social media.

The ITV News presenter, 67, made the decision to step down after four decades after a comment he made to black Twitter user Martin Shapland.

During a spat with Martin, Alastair responded with a quote from Shakespeare’s Measure for Measure which contained the phrase “an angry ape”.

It read: “But man, proud man, Dress’d in a little brief authority, Most ignorant of what he’s most assur’d – His glassy essence – like an angry ape, Plays such fantastic tricks before high heaven.”

Shapland retweeted the tweet and branded the presenter “a disgrace”.

In a statement announcing his decision to step down, Alastair said: “It was a misjudgement which I regret, but it’s been a privilege to bring the news to households throughout the UK for the past 40 years.”

An ITN spokesperson added: “After many years working across a variety of news programmes, Alastair Stewart is stepping down from his presenting duties.

“The decision, which is supported by both ITV and ITN, follows errors of judgement in Alastair’s use of social media which breached ITN’s editorial guidelines.”

Many people agreed with Alastair stepping down but others think he should be back at ITV.

Martin needs to publicly apologise and Alastair needs to have his job reinstated!

One user on Change.org called Justice for the Injustice has launched a petition titled: “Get Alastair Stewart reinstated back on ITV.”

The petition read: “Alastair Stewart has been ridiculously forced to quit his role on ITV after 40 years due to Martin Shapland accusing him of calling him ‘an angry ape’ after quoting Shakespeare despite no direct conversation on Twitter between the two and with Martin using racism as the offense.

“The quote is reference to how a person can lose their sight with anger and refuse to listen to reason. It’s not racist either,  Martin needs to take account the evolution of apes to humans of all races.

“Martin needs to publicly apologise and Alastair needs to have his job reinstated!”

Meanwhile, Martin has spoken out on Twitter writing: “In so far as Mr Stewart caused hurt and upset, intentionally or otherwise, in an exchange earlier this month, there is a wider context.

“I understand that Mr Stewart has acknowledged the words he used were misjudged and has expressed regret at what happened. I thank him for that.

“An apology and commitment to be more careful about language was all that I would have asked. It is regrettable that he has decided to stand down and I take no pleasure in it.  He has evidently gone through an ITN and ITV process and I respect his choice.”