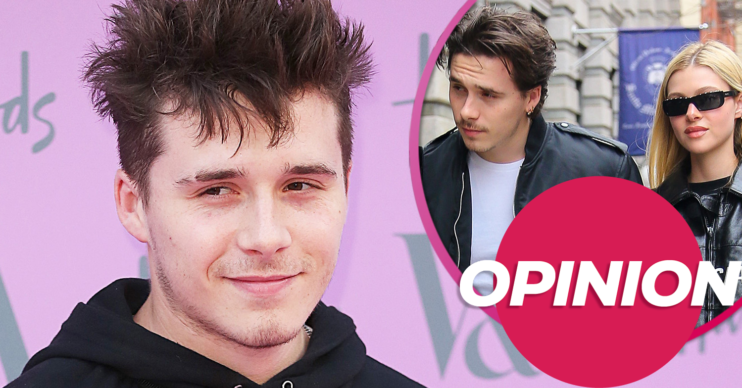 OPINION: ’21 is too young to get engaged as Brooklyn Beckham proposes to girlfriend’

Brooklyn is getting married to Nicola Peltz

Brooklyn Beckham announced over the weekend he’s engaged to his girlfriend Nicola Peltz.

It was lovely to see the 21-year-old celebrate the news on Instagram along with his famous family.

But I couldn’t help but feel 21 is quite young to be planning to get married.

In his recent Instagram post, the photographer called Nicola his “soulmate” and she said she couldn’t wait to “spend the rest of her life” by his side.

But to get engaged after just months of dating seems a bit quick.

I mean, Brooklyn’s parents were in their early 20s when they got married so I suppose he’s just following in their footsteps.

I just think Brooklyn and Nicola could have waited until they were a little older to make such a big commitment.

The engagement has obviously sparked a lot of reaction on Twitter.

And it seems many people have the same view as me.

One person said on Twitter: “Brooklyn Beckham is just 21 and he’s engaged!

“Where are these young people rushing to?”

Another agreed, writing: “Brooklyn Beckham just got engaged and he is only 21. Too young I think.”

One added: “Brooklyn Beckham is only 21yrs old and engaged already?!

“Seems like he was just 15-years-old. Whew! That’s young for marriage. Best of luck to them.”

Don’t get me wrong, Victoria and David have stood the test of time so Brooklyn and Nicola could be the same.

I just think they could have waited a little longer as they seem to still be in their loved-up phase.

Another thing that shocked me was the rumoured price of Nicola’s ring.

Apparently, it cost around £300,000 and while it’s completely stunning, that’s a hell of a lot of money to spend.

I mean, that could literally buy a house!

However, there’s no doubt their big day will be incredible and I wish Brooklyn and Nicola all the best.