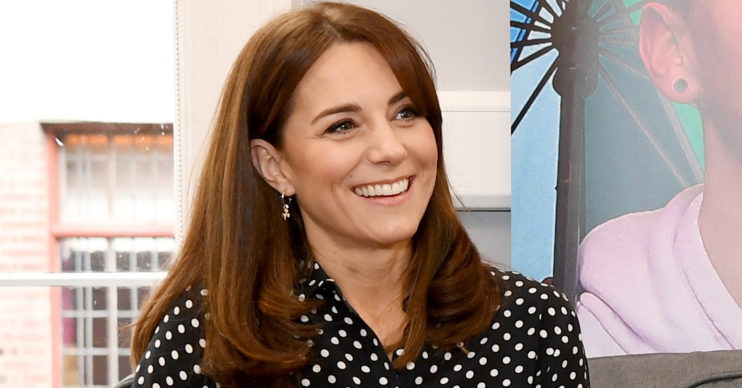 The Duchess of Cambridge rarely puts a foot wrong when it comes to fashion.

Whether she’s representing the Queen at an official engagement or dressed down when with the kids, Kate is always the epitome of elegance.

And now a royal etiquette expert has revealed just how she does it.

Along with her natural grace and elegance, the royal employs a “secret trick” to ensure she never suffers an unsightly wardrobe malfunction.

Underwear is considered “private intimate wear”. As such, bra straps and knicker lines will never be visible.

Author and etiquette expert Myka Meier trained under a member of the Queen’s Royal Household.

Ever wonder why you never see bra straps?!

She added: “Swipe to see a secret trick which is a must-have royal wardrobe piece!”

The dress featured sheer sleeves with delicate embroidery that left no room for bra straps to be hidden.

In the next picture, Myka revealed the secret.

She posted a picture of strapless nude bodysuit, revealing the duchess would have worn the shapewear underneath her dress to abide by the royal rules.

Sewing bras into dresses is another trick used by the royals to give a polished look.

Myka told Fabulous: “Underwear and bras are also considered private intimate wear, and for royals to put intimate apparel on display would simply not be done.”

She added: “There are a few options to hide bra straps, with one option being a bra that is actually sewn into the piece. A second option is strapless shapewear, which is a one-piece that either snaps at the bottom or has legs attached.”

She advised you can buy them in almost any skin tone so they appear transparent and “don’t show through clothing”.

Myka added: “You want the attention to be on the beautifully tailored and designed garment and not the undergarments. Undergarments showing can take away from an amazing outfit.”

Bodysuits also increase static and are thought to be used by the royal ladies to stop skirts blowing up in public and revealing their underwear.

The Queen has her own trick, though.

She uses weights along the hem of her dresses.

It’s said they are sourced from the curtain accessories section of department store Peter Jones.