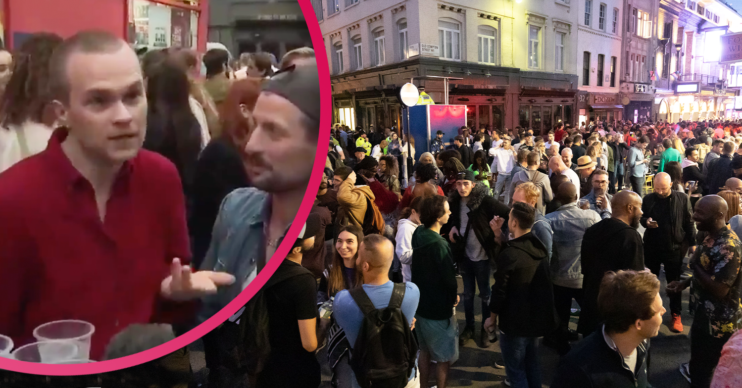 Brits angry at his flippant comments

A Super Saturday pubgoer has angered Brits with his flippant comments about social distancing.

The man was out in Soho, London, on Saturday (July 4).

In scenes that have dominated the news this weekend, social distancing rules appeared to be ignored by revellers.

Thousands were seen partying outside pubs up and down the country following Boris Johnson‘s easing of lockdown.

Some 15 millions pints were said to have been ordered in pubs and bars across England.

However, one man interviewed on Sky News really seems to have angered Brits.

He admitted that people weren’t socially distancing and admitted: “But it’s kind of fun.”

Saturday marked the first day pubs and bars in England could reopen since lockdown was imposed in March.

Have fun on the ventilator mate and then dying a horrible death!

Under the new regulations, people should stay one metre apart if it isn’t possible to stand two metres apart.

The fact revellers were disregarding the rules and seeming to laugh at the guidelines angered viewers.

“I understand the need to socialise, especially when you’re young and feel invincible, but let’s hope these words don’t come back to haunt him,” said one.

Another added: “P***ed up and partying during a deadly pandemic! What could possibly go wrong?”

“I wonder if it will still be fun two weeks from now,” said another.

“The worst part is others could pay with their lives for this. Selfishness personified,” another slammed.

A third added: “At the NHS we’ll be doing our best in a couple weeks to try and save yours and your beloved ones lives, if we can. But hey, at least it was fun, right? #coronavirus #secondwave.”

on his gravestone it would read ‘death – kinda fun(!)’

Have fun on the ventilator mate and then dying a horrible death! What a kn*b but clearly, there are thousands of #COVIDIDIOTS #AshamedtobeEnglish

I really hope you’ll all be having fun fighting for your last breath when you get #covid #COVIDIDIOTS that should be a barrel of laughs ,or when your mother, grandparents get it,will you still think it was worth it 🤬

He said: “What was crystal clear is that drunk people can’t/won’t socially distance.”

Commenting on his night working in Southampton, he added: “It was a busy night but the shift managed to cope. I know other areas have had issues with officers being assaulted.”