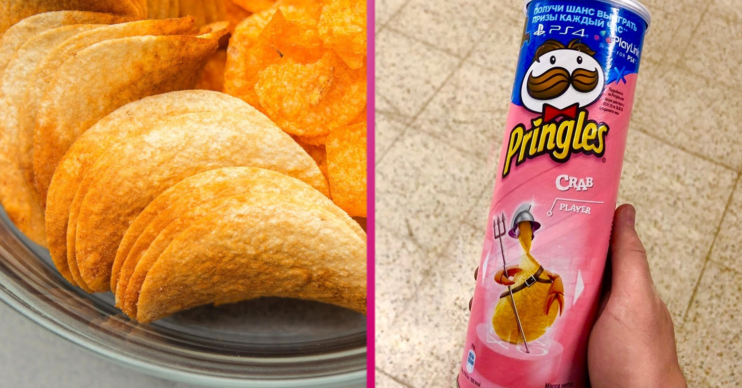 Shoppers are divided after a new Pringles flavour was spotted on sale in Home Bargains.

As well as the more traditional Original and Sour Cream & Onion, the bargain store is also stocking Crab Pringles.

The fishy crisps are actually a Russian import.

And, while some said they can’t wait to try them, one shopper revealed they definitely won’t be buying them again!

However, Reece of NewFoodsUK told ED!: “I didn’t like them at all.”

He added: “I’ve never tried crab before but I’m assuming that’s what crab tastes like and won’t be trying it!”

Reece revealed he “kinda thought they would just taste like prawn cocktail”.

The crisps are actually crab meat flavour and, it seems the brand’s “once you pop, you can’t stop” slogan doesn’t apply to the fishy crisps.

However, he said: “The smell and taste was very weird. I won’t be buying again.”

Some of his followers agreed.

One said: “Vom,” with the green vomit emoji.

Another said: “That flavour is all kinds of wrong.”

“I don’t know about them,” said another.

“Fishy Pringles? Imagine sitting next to someone eating them!” another exclaimed.

One follower, who has clearly visited Russia, claimed “Russians like crab-flavoured crisps”.

They added: “Crab Lay’s are super stinky but there was always someone eating them next to you in the movie theatre.”

“What a weird flavour,” said another.

Crab Pringles are the worst thing I’ve ever tasted

“Easily the worst flavour,” said another.

Others wondered if the crisps would set off their pal’s shellfish allergy.

Tagging them in the comments, one joked: “I wonder if you’d still get a reaction?!”

Fishy Pringles? Imagine sitting next to someone eating them!

Others seemed keen to try them, though.

“Wow!” said one. “Didn’t see them today, will keep my eyes peeled next time I’m in store.”

“Tried them and they’re nicer than you’d think!!” said another, with the fire and crab emoji.

Others wondered how the crisps has washed up on our shores.

“Why have Russian Pringles ended up in Home Bargains?” one asked.

Have you tried them? Tell us on our Facebook page @EntertainmentDailyFix.