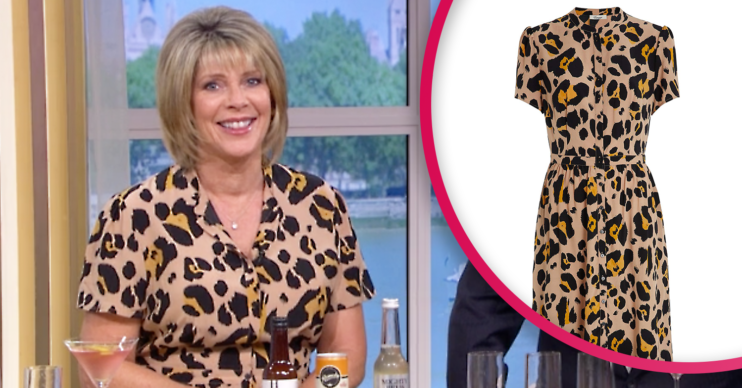 Eamonn got in on the act, too!

The TV presenter appears to have taken over from her co-star Holly Willoughby in more ways than one.

As well as filling her shoes over the summer months, Ruth is also taking over Holly’s role as the show’s resident queen of fashion.

As all Holly fans will be aware, the blonde This Morning host uploads a daily #HWstyle post to Instagram ahead of every show.

And viewers lap up the presenter’s daily look.

In her absence – both on screen and on Instagram – Ruth has taken over.

She tends to go one better than Holly, however, and instead of uploading a still image, she shares a video to the social media site.

And today’s was a feast for the eyes.

Where is Ruth Langsford’s leopard print dress from?

It’s called the Somerset and it’s by Alice Temperly.

She also revealed that her nude patent court shoes were by Sam Edelman.

“Gorgeous – love that on you,” her Loose Women co-host Saira Khan said.

“Be right back, just calling the RSPCA to report a leopard on fire!” said another Ruth fan.

Be right back, just calling the RSPCA to report a leopard on fire!

“Love the dress, it really suits you,” said another.

“Beautiful dress. You looked amazing this morning,” another complimented the host.

However, her husband Eamonn Holmes wasn’t quite as gushing about his wife’s look.

Instead, he took exception to the fact that she decided to show it off on Instagram.

First up, he asked: “Why would we never see this dress on you again?”

“Well you might,” Ruth explained, “but on this show we embrace all different brands and fashions and styles.”

Then he dropped the bomb.

“Why is the internet full of women doing this with their clothes?” he asked, flinging his arms in the air.

“Why don’t men, why don’t Phillip Schofield and me not stand there the morning and say this is the shirt we’re wearing?” he asked.

“Well you can do,” Ruth said, before offering to film a “little fashion Boomerang” of her husband.

“Like what you do?” he asked, before standing up and strutting his stuff.

“Eamon has a lot to learn about that twirl!” said another.

We can’t wait to see what the cheeky pair wear tomorrow – and how they show off their outfits!