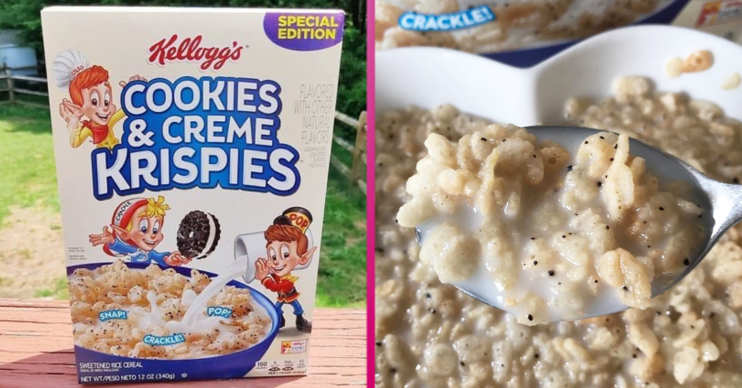 You had us at Snap, Crackle and Pop!

Breakfast just got a whole lot more exciting thanks to a new launch from Kellogg’s.

Yes, your humble bowl of Rice Krispies is about to be replaced with a new breakfast treat with added Snap, Crackle and Pop.

And they look so good, we’re considering having them for lunch and dinner too!

And, as well as all that Rice Krispie loveliness you’re used to, these feature flecks of Oreo-style cookie pieces.

“I just had to try these new Cookies & Creme Rice Krispies. They’re a special US edition with a cookies and cream flavour plus some cookie bits sprinkled on,” he said.

Kev continued: “Opening the box I was worried as they smelled of nothing. But the flecks of Oreo-style cookie looked fun so I added some milk and took a bite.”

A “creamy vibe” and “cookie-like flavour”

And, it appears, he liked them.

“They taste pretty nice and definitely have a creamy vibe going on, with a cookie-like flavour,” he posted.

However, the flavour wasn’t as strong as he would have hoped.

“Still nice though and different enough from the regular variety for a limited edition, but if they bumped up the flavour and added proper cookie pieces in these would be great!” he said.

“One bowl won’t be enough,” joked another.

“These would be awesome on ice cream,” said a third.

“If you’ve never had the Cookies & Creme Rice Krispies, you’re missing out,” declared another.

Kev’s followers, however, were divided.

If you’ve never had the Cookies & Creme Rice Krispies, you’re missing out!

Some really liked the look of them and couldn’t wait to try them.

“I bet they are amazing!” said one Rice Krispies fan, tagging their pal.

“OMG I need to try these,” said a third.

Others, however, commented on the cookie flecks in the cereals.

“Looks like dirt in your cereal,” one said, adding the crying with laughter emoji.

“I just don’t know how to feel… Like it looks like pepper’s on it, but could taste good,” another mused.

The jury’s out, it appears, but we think they look pretty delicious.

As they’re an American import, you won’t be able to buy them in supermarkets.

Instead, head online to GB Gifts if you want to try them.

You can pick up a box here for £9.99 plus postage when stock drops on Wednesday (July 8).