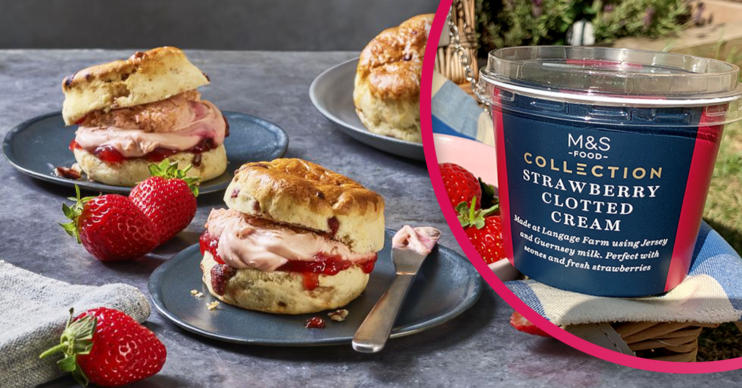 Cream first or jam first? Or both at the same time?!

The good people at M&S have attempted to solve the age-old cream first or jam first scone debate with its latest food launch.

Firstly, let us introduce you to the really rather delicious looking Strawberry Clotted Cream.

On the surface, it appears to solve the scone conundrum.

“Are you cream first or jam first?” M&S posted on Instagram.

“Whichever way you like it best, our NEW Collection Strawberry Clotted Cream blends the BEST OF BOTH WORLDS in one pot for the first time ever,” the post added.

“With thick luxurious cream made from Jersey and Guernsey cow’s milk, and a delicious strawberry compote – it tastes incredible!”

While it may taste incredible, the Twittersphere wasn’t so keen on the idea.

“No. Just no. There are some things you simply don’t mess with – except you just have,” said one scone fan.

“Isn’t there enough trouble in the world that you had to go and do this?” commented another.

“Why not just go the whole way and include the scone as well, make the whole thing into a paste and put it in a tube?” said another.

“This is an abomination,” said another. “For goodness sake stop pandering to lazy people who can’t even be bothered to construct a scone with clotted cream and jam.”

No. Just no. There are some things you simply don’t mess with – except you just have.

Others pulled the store up on its social media post, which showed a scone spread with jam and topped with the cream.

“But… you’ve still put the jam on first????” questioned one.

“You think you can just stroll into a conflict between Devon and Cornwall like this? Fools,” blasted another.

For those not in the know, there are two very different ways of preparing your scone as part of a cream tea.

The Devonshire method sees the scone split in two, covered with clotted cream and topped with strawberry jam.

The Cornish method tips that on its head. The scone is first spread with strawberry jam before being topped with clotted cream.

“In the name of all things holy, nooooooooo,” said one Devonshire fan.

Even comedian Dawn French got involved.

There’s hell on!
Am mobilising the Cornish Barbarian Horde…. we will not rest til this battle is won & our cream is safe again…appalling. https://t.co/ErU3CJXSPA

“As a Devon boy it has to be cream first,” said another.

“Never understood that,” one person replied. “How do you spread jam on top of cream?”

In other cream news, Aldi has launched a new Strawberry & Prosecco flavoured cream.

Head to our Facebook page @EntertainmentDailyFix and tell us what you spread first!