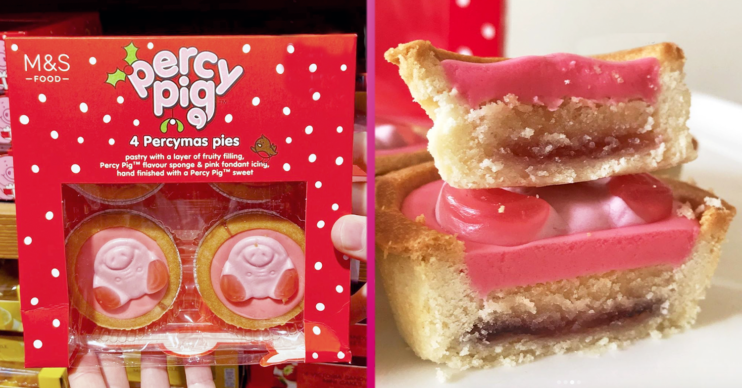 The Percymas Pies are on sale now!

The Percy Pig Percymas Pies are apparently a cross between a cherry Bakewell tart and the popular M&S sweets, according to early testers.

The whole thing is topped with a Percy Pig sweet and there’s no mincemeat in sight.

KevsSnackReviews, meanwhile, said they tasted like a cherry Bakewell tart.

“Designed as an alternative for those who don’t like traditional mince pies, these consist of pastry filled with a grape jelly and berry and grape flavour sponge, topped with pink icing and a gum sweet.”

Oink oink! Percy has transformed again into another form… this time pies!

Kev continued: “They’re a little bit like cherry Bakewell tarts and rather nice! The pastry is nice and buttery, with the jam giving a light sweetness and the sponge adding some extra fruity flavour. Definitely a hint of Percy in there!

“The icing gives the classic cherry Bakewell style sugar rush and, of course, Percy Pig is literally the piggy on top!

“Overall a fun alternative to mince pies which Percy Pig fans will love!”

What have Brits said about the Percymas Pies?

Kev wasn’t wrong, Percy fans flooded his post – and the NewFoodsUK one – with comments.

“They look better than mince pies,” another countered.

Others branded the Percymas Pies “heaven”.

“OMG I need these!!” said another.

“Shut the front bloody door!!!! This is insanity. I must have some!” declared another.

Others thanked M&S for saving Christmas.

“Bring on the Christmas cheer early!” said one, tagging a Percy Pig-loving pal.

Another commented: “M&S has saved Christmas!”

Others clearly decided that Percy isn’t just for Christmas, he’s for life.

“I need a lifetime’s supply,” they commented.

How much are they?

Well, if you feel the same, they’re on sale in M&S now.

The Percymas Pies cost £2 for a box of four.