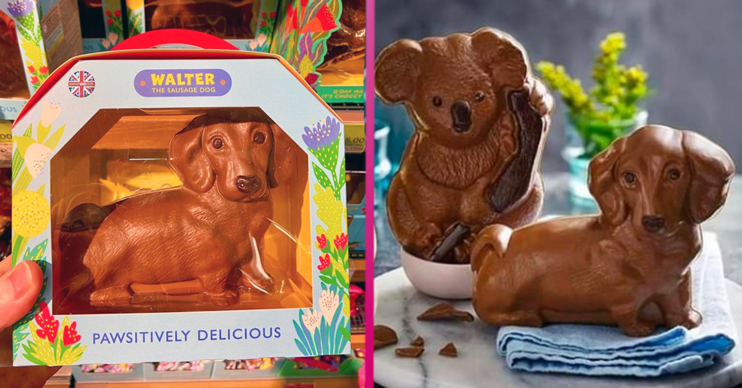 The food gods at M&S have unveiled the store’s 2021 Easter eggs and Brits all have the same worry about the adorable new Walter the Sausage Dog chocolate “egg”.

Walter is the cutest little sausage dog that you’ll probably ever see.

The box states that he’s “pawsitively delicious” and it’s this that’s got Brits all in a tizzy.

Posting on NewFoodsUK’s picture of Walter, dozens of Brits all had the same concern.

What did Brits say about the new M&S Easter eggs?

Brits seem pretty concerned about tucking into Walter, it has to be said.

While the milk chocolate dog-shaped offering no doubt tastes delicious, many have said they would feel bad devouring him!

Read more: The best coats to snuggle up in for winter lockdown walks

“I’d feel like I was eating Fin,” said another of their pet pooch.

How could you break it up and eat it though?!

“He’s too cute to eat,” said another.

“How could you break it up and eat it though?!” said another with the crying emoji.

“Ah man, I couldn’t eat him!” came the response.

Other chocoholics seemed more than happy to tuck in, though.

“Think I need to go and get one!” one M&S food fan declared.

“Want to go to Marks & Spencer NOW!” said another.

If you feel the same, you can pick up your very own Walter in store now.

What else is in the M&S food Easter range?

There’s a range of other goodies in the range, including a white chocolate Easter bunny and a milk chocolate koala.

Our heart belongs to the giant chocolate Percy Pig, though.

He’s made of pink chocolate and wears shorts decorated with brightly coloured hundreds and thousands.

He’s substantially bigger than Walter and, as such, is a tad more pricey.

You can shop the giant Percy Pig Easter egg in store now for £10.

When is Easter this year?

There’s a few months to go before you can crack into your Easter eggs.

Good Friday falls on April 2, while Easter Sunday is on April 4 this year.

Head to our Facebook page @EntertainmentDailyFix and tell us which egg you want this Easter.