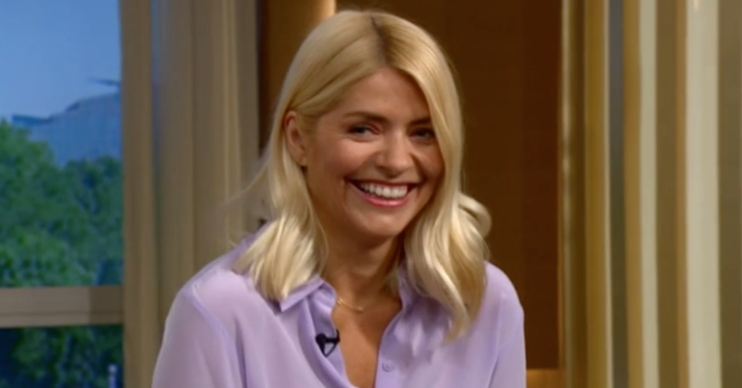 The star wore a purple mini skirt on Tuesday's show

TV’s Holly Willoughby showed off her toned and tanned legs as she presented This Morning today (June 2).

However, while many of the star’s fans gushed over her outfit, others focused on something entirely different.

“Great legs,” posted one fan of her look to Twitter.

“I love Holly’s outfits, so jealous of her wardrobe,” said another.

“Stunning,” said another, who hoped Spin To Win was on early in the show so they could catch a full-length glimpse of her outfit.

Read more: Brits to enjoy highs of 28˚C before thunderstorms swoop in

They said: “Hope they have an early #spintowin again. Don’t think I’m patient enough to wait until 12.10 to see this outfit in full.”

Is it just me or can you see a sloth’s face in Holly’s knees?

Indeed they did, and that’s when one This Morning viewer spotted something lurking in Holly’s knees.

A sloth’s face in Holly’s knees?!

Taking to Twitter, the man – called Dave – claimed to see a “sloth’s face” in the TV’s hosts knees.

He even posted a close-up shot of the star’s legs to illustrate his point.

Dave tagged the ITV show and tweeted: “Is it just me or can you see a sloth’s face in Holly’s knees?”

The cute furry creatures have adorable faces and are noted for their slowness.

They spend most of their lives hanging upside down in the trees of the tropical rain forests of South America and Central America.

Bosses at This Morning, predictably, didn’t reply to the fan’s tweet.

However, take a look for yourselves and see what you think!

Both of Holly’s knees are visible in the shot and, if you squint, we reckon that you can kind of see what he’s talking about.

@thismorning is it just me or can you see a sloths face in Holly’s knees pic.twitter.com/oFt5Vvu8Az

Holly didn’t upload details of her outfit to Instagram as usual today.

Instead, she told her followers she would be taking part in #blackouttuesday to “stand in solidarity with our black colleagues, storytellers and viewers”.

Presenter Alison Hammond broke down in tears on the show as she told of the importance of the show of solidarity.

Head to our Facebook page @EntertainmentDailyFix and tell us if you can see the sloth!