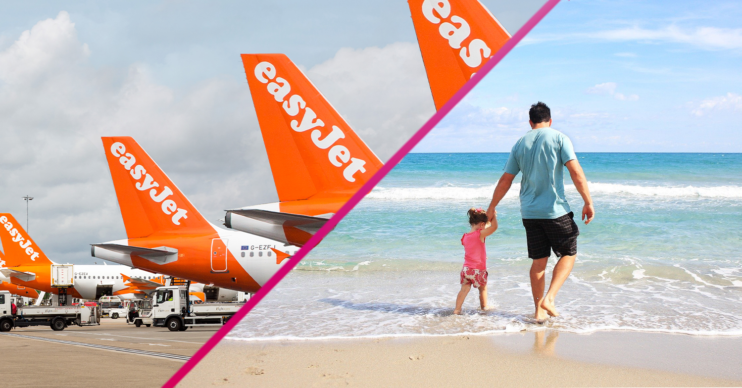 Budget airline EasyJet has has taken to the skies today (June 15) as flights resume for the first time in 11 weeks.

EasyJet’s entire fleet was grounded when Boris Johnson announced lockdown back in March.

However, with lockdown starting to ease, the airline has returned to the skies.

EasyJet is also flying to France, Italy, Portugal and Switzerland, The Sun reports.

The first flight from London Gatwick took off for Glasgow just before 7am this morning.

We are delighted to announce that we will be flying the majority of our route network across Europe.

And things looked a little different on board.

Passengers and crew are now required to wear masks at all times on board.

Planes will be deep cleaned regularly, and disinfection wipes and hand sanitiser are available to passengers.

Additionally, no food or drink will be offered on board.

No alcohol on board

The sale of alcohol has also been scrapped. Passengers are instead limited to a glass of water on board.

With social distancing tricky in the skies, EasyJet chief executive Johan Lundgren said he would feel “safe” if his planes were full.

The EasyJet website states: “Customers will be able to practice social distancing in the airports, at gates and during boarding. Onboard, and where possible, crew will invite customers to sit at distance from customers not in their party where seats are available.”

The airline is planning to run three quarters of its routes by August.

The airline’s Robert Carey said: “We are delighted to announce that we will be flying the majority of our route network across Europe.”

He added it means “customers can still get to their chosen destination for their summer holidays this year”.

Will Brits be allowed to visit Spain?

And, while borders are reopening, Spain has revealed when Brits will be allowed to holiday in the country again.

It initially announced it was reopening its borders to tourists from countries within Europe’s Schengen area from June 21.

Read more: Primark shoppers queue outside stores from 5am

People living outside the area would be banned from visiting until July 1.

However, the government has since confirmed that, from June 21, Spain will allow the entry of visitors from Schengen and the European Union.

Britain is still considered part of the EU. Which means Brits will be able to holiday in Spain later this month.

Next week, in fact!

Spanish PM Pedro Sanchez announced: “The recovery of tourist activity is key for this government. Spain will lift border controls with the EU member states from June 21.”

However, the UK’s 14-day quarantine restrictions will also put many Brits off of travelling overseas.

Last week, EasyJet joined forces with BA and Ryanair to start legal proceedings to have the government’s quarantine measures overturned.

The EasyJet boss added: “We would hope and would be really looking forward to restrictions being either lifted, or air bridges put in place where it made sense to do so.”

He continued this would allow “UK customers, as well as people in the rest of Europe, to be able to go on a holiday”.

The Foreign & Commonwealth Office is still advising against all but essential travel.