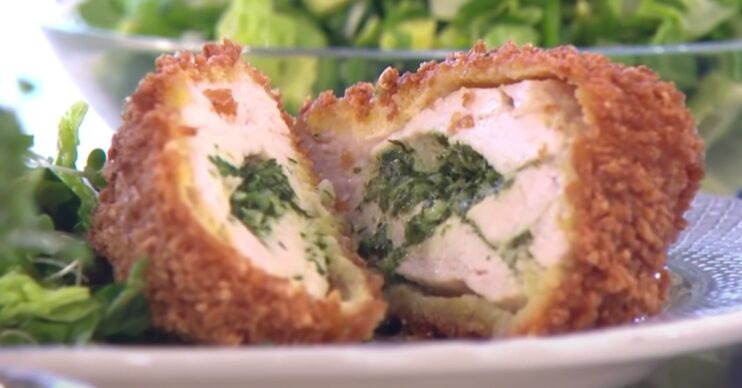 Chicken Kiev to Chicken Kyiv? Supermarkets called on to rename dish in support of Ukraine

Is it time to update what we call the breadcrumbed cutlet dish?

‘Chicken Kiev’ should be renamed ‘Chicken Kyiv’ following the invasion of Ukraine by Russia, according to some Twitter users.

The breadcrumbed cutlet is considered the creation of a French chef in 19th Century Russia.

However, other food historians believe it has origins in the Ukrainian capital’s Continental Hotel restaurant kitchen in the early 20th Century.

But no matter the past of the dish, or where it was first prepared.

Many Western news outlets have recently adopted the use of ‘Kyiv’ rather than ‘Kiev’. And some Twitter users hope the name of culinary export will follow suit.

Furthermore, social media users reckon the gesture would be one of ‘solidarity’ with those enduring the conflict.

Chicken Kiev to Chicken Kyiv – why change the name?

‘Kiev’ was the standardised spelling for the Ukrainian capital until the Soviet Union fell apart in 1991.

The name has largely continued to be used by Westerners. However, the Russian invasion of Ukraine has ensured much reconsideration in how to refer to the city, particularly by media outlets and other institutions.

The issue is complicated by neither the Ukrainian nor Russian spellings of the capital having direct translations into the Western alphabet.

Furthermore, younger Ukrainians in particular regard the spelling ‘Kiev’ a relic. To that end, the Ukrainian government launched a ‘KyivNotKiev’ campaign in 2018.

According to reports, the UK government has referred to the location of its embassy as being in ‘Kyiv’ since 2014.

On social media, some users have called on UK supermarkets to make ‘appropriate’ alterations to their packaging and marketing.

Can we have ‘Chicken Kyiv’ going forward please?

Another person enquired online: “@marksandspencer can we have ‘Chicken Kyiv’ going forward please, as a small gesture of solidarity to our Ukrainian friends?”

“Chicken Kyiv – can all supermarkets change the spelling of ‘Kiev’ to the Ukrainian spelling ‘Kyiv’?” a third person echoed.

They suggested: “First by overlaying labels and then changing it permanently on the printed packs.

“Second, donate part of the profit to aid the families caught in the conflict.”

And a fourth pondered: “Should stock be removed from shelves and relabelled ‘Chicken Kyiv’?”