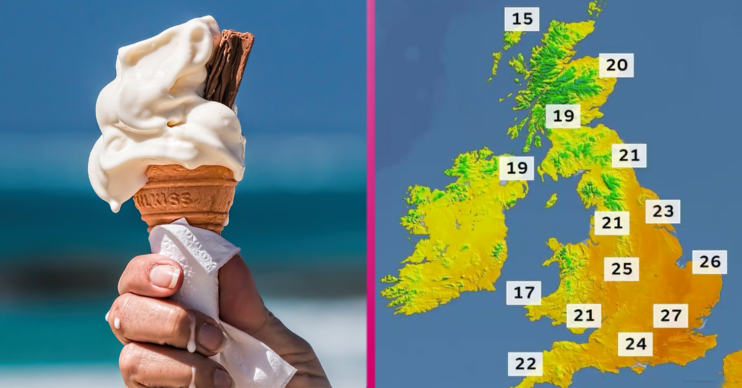 Sunscreen at the ready!

Brits are set to bask in a sweltering 29˚C heatwave over the next few days and the best news is, the warmer weather is set to last all weekend.

While many have woken up to grey skies this morning, the sun is about to get its hat on.

And so should you, as it’s going to be boiling!

Temperatures should start to rise today in London and the south east, with highs of 27˚C predicted.

It’s all thanks to a large plume of hot air that’s about to sweep in from the continent, which will bring warmer weather.

The Midlands is expected to reach highs of 23˚C today, with temperatures in Wales also on the rise.

Some parts of the north will be cooler, though, with some showers expected.

Come tomorrow (Friday, July 17), the south of England could be seeing highs of 29˚C.

This means we might just be enjoying warmer weather than parts of Spain.

Temperatures in Ibiza tomorrow are only predicted to hit 28˚C.

Feeling a bit cool today? It’s warming up for many by Friday 🌡️ pic.twitter.com/IKIUW9wURI

And it appears the heatwave temperatures are set to stick around all weekend.

Highs of 28˚C are expected in parts of the UK on Saturday.

Sunscreen at the ready!

On Sunday things will dip slightly, but you’ll still need to apply some hefty sunscreen.

The mercury is expected to hit 27˚C.

Met Office forecaster Nicky Maxey said: “The sunshine is back over the next few days.”

He added: “It’s going to feel more like July. Friday looks like it’s going to be the hottest day, but temperatures will still be high across the weekend.”

And, although temperatures will dip next week, things will be a lot warmer than we’ve been used to.

Temperatures near or slightly above average but perhaps warm or at times very warm in the south.

The Met Office’s Aidan McGivern revealed: “There is a warming trend in the south later this week, certainly by the end of the week and into the weekend, with temperatures back up to into the high 20s, if not higher.”

Next week, parts of the UK will enjoy highs of 23˚C.

Looking forward to the end of July, the sun looks set to continue to shine.

The Met Office forecast revealed: “Temperatures near or slightly above average but perhaps warm or at times very warm in the south.”

Things are looking good for August, too.

“Through the end of July and into August many parts of UK are likely to see periods of drier and settled weather, most especially in the south.”

Enjoy the sunshine, and remember to stay safe.

Head to our Facebook page @EntertainmentDailyFix and tell us how you’ll be enjoying the heatwave.