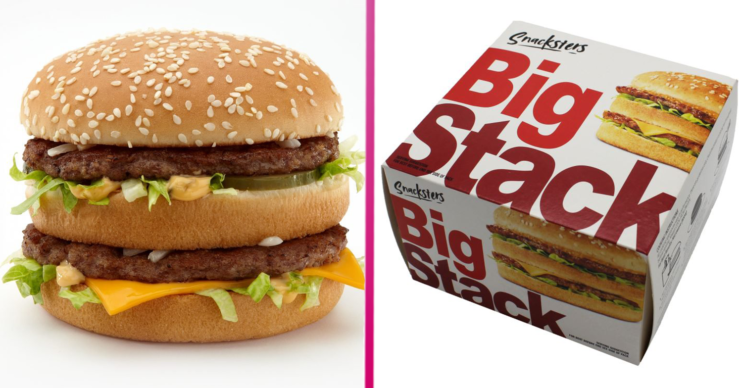 Aldi McDonald’s range launches and Brits are predicting another lawsuit

The budget supermarket is already in trouble with M&S…

Aldi has launched a McDonald’s copycat range and it’s going down a storm with fast food fans.

However, some have wondered if the store is wading into another lawsuit with the launch.

Of course, Aldi is embroiled in a legal battle with M&S over claims it copied the store’s Colin the Caterpillar cake.

So could it be heading the same way with McDonald’s? And do the McDonald’s-esque products taste anything like the real thing?

Read on to find out!

Budget supermarket Aldi has launched a triple whammy of new products – and they’re hitting the shelves next week (May 24).

“On to burger and better things!” a rep declared, announcing the range.

“Aldi has today announced the launch of its new McDonald’s inspired range, but at a fraction of the price.

The rep added: “Everyone knows a McDonald’s order isn’t complete without a serving of classic chicken nuggets, and Aldi’s version will be no different.”

And they even come in a McDonald’s style cardboard box!

The Big Mac-style Big Stack is also less than half the price of the McDonald’s original.

And we’ve tried it, and we have to say it’s pretty easy to cook and tastes downright delicious.

Aldi’s going to get sued by McDonald’s next!

The Breakfast Hash Browns round out the trio of new launches.

And they’re 85% cheaper than McDonald’s!

So what have McDonald’s fans said about the launch?

Some have speculated that Aldi could perhaps be heading for trouble with the launch.

Posting on Instagram, one said: “Oh my gosh, the packaging is so asking for a copyright lawsuit!”

“Aldi’s going to get sued by McDonald’s next,” another predicted.

“Thought McDonald’s just released its own frozen products for a minute!” declared another.

“No [bleep] given for the trademark. Love it,” another laughed.

“I need these!” another concluded.

So will you get trying the Aldi McDonald’s range? Tell us on our Facebook page @EntertainmentDailyFix.