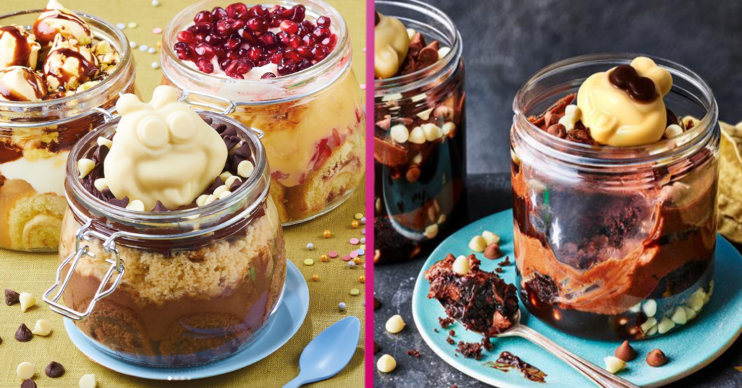 The M&S caterpillar cake war shows no sign of letting up thanks to a rather cheeky Instagram unveiling by Aldi.

Of course, the two supermarkets are heading to court over their respective caterpillar cakes.

And now the budget supermarket has stoked the flames of an already-burning fire.

And, while they look entirely delicious, the idea isn’t exactly original.

M&S launched three cake jars recently – one of which is based on its famous Colin the Caterpillar cake.

Read more: M&S goes to war with Aldi over its ‘copycat’ Colin the Caterpillar cake

Now Aldi has unveiled a trio of cake jars – and one of them just happens to look suspiciously like the M&S Colin one.

What did Aldi say about the cake jars?

The budget supermarkets cake jars are actually a how-to recipe, so you can make them at home.

Posting the recipe cards to Instagram, Aldi also shared a picture of the finished cake jars.

It said: “Ready to take your Caterpillar Cake love to the next level?

“These Caterpillar Jars are the perfect treat for when you want a little more than just a slice.

“Easy to make and perfect for entertaining, go on give them a try!”

How did caterpillar cake lovers react?

The tongue-in-cheek post was met with disbelief – and a lot of laughter – from followers.

One said: “Naaaaaaaah you’re taking the [bleep] now! And I was all team Aldi.”

Another said: “Aldi doesn’t know when to stop,” adding the crying with laughter emoji.

“The war is on!” another laughed.

“Let the beef commence,” said another.

“Aldi at it again haha…. M&S do these jars too!” laughed another Aldi fan.

“Aldi did not go there!” laughed another.

What do you think of the M&S caterpillar cake war? Tell us on our Facebook page @EntertainmentDailyFix.