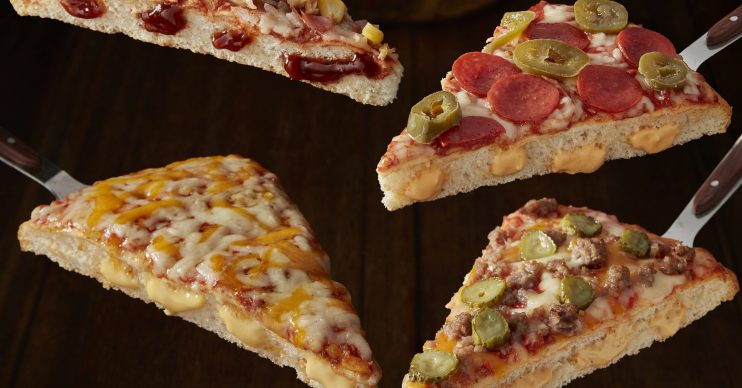 You can’t beat a good burger… unless it comes stuffed into a pizza base, that is!

In what’s thought to be a UK first, the new Super Stuffed Base Pizza range has “bursting pockets of sauce within the base” and there are four varieties of delicious toppings to choose from.

While we don’t know which one to gorge on first, the one that’s really got the nation talking is the Super Stuffed Base Cheeseburger Pizza.

And it appears that it’s so good, some early testers have declared that it’s “life-changing”!

We must admit, it is said to taste just like the Domino’s version, but at £2 is costs almost £16 less than the takeaway version.

Read more: Ice cream fans are raving about the new Mermaid Cornetto with its pink cone

Beef, cheese, gherkins and an elusive secret sauce feature in the pizza.

And all you have to do if you’re craving the best of both burger and pizza worlds is bite into the pizza to release the flavour hidden within its base.

The launch means you can enjoy the marriage of the two classic dishes without the expense of a pricey takeaway.

Meat lovers will go crazy for the Chicken & Bacon pizza, which is topped with tender chicken and flavourful bacon. Its base bursts with barbecue sauce!

Read more: The date of the Tesco half-price Easter egg sale has been released and all medium-sized eggs are included

There’s also a pepperoni version, stuffed with a spicy red cheddar sauce for a secret kick of fiery flavour.

While veggies can enjoy the Cheese Feast – a “triple-threat cheesy onslaught of mozzarella, red cheddar and mature cheddar cheese toppings, in addition to a red cheddar sauce lying beneath the surface of the soft pizza dough”.

“I want cheeseburger one nowwww!!” said one fan on Instagram.

“OMG the burger sauce one!”

I want cheeseburger one nowwww!!

“It’s all about the base,” quipped another.

“This is life-changing,” another added.

“You know I’m trying these,” said another soon-to-be fan, tagging their friend.

“I’ll have to keep an eye out for weekend tea,” came the reply!

If you fancy trying them, they’re in store now.