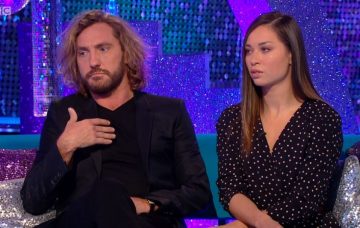 Strictly say nothing? Not likely!

It’s the topic on everyone’s lips, but if you were hoping to glean more gossip on Strictly’s cheating scandal from this year’s contestants – you’ll be sorely disappointed.

This year’s celebrities and professionals alike are putting on a united front by staying tight-lipped on the scandal, after pictures emerged last weekend of Seann Walsh and Katya Jones kissing in the street following a boozy night.

Then, Katie Piper and Ashley Roberts managed to evade discussing their fellow contestants at the unveiling of Stacy Solomon’s Primark collection in London on Thursday night.

The love I have for this chica 💞 So proud of you mama! You deserve all the goodness! #staceysolomonxprimark

While The Sun reports that TV execs have imposed a ban on discussing the controversial subject, a BBC representative told Entertainment Daily that this was “total nonsense”.

“Bosses have been completely panicked over the situation – and at a loss to know the best action to take,” a source close to the show reportedly told The Sun.

“There was a lot of pressure about whether Seann and Katya should be pulled from the show altogether – but they’re obviously set to perform as normal this weekend.

“Instead of axing the couple, execs have warned all celebrities competing in the current series not to pass comment on the situation.”

Yet Judge Craig Revel-Horwood has broken silence on the subject, telling Jonathan Ross that he thinks they should be made to do “the dance of shame”.

Meanwhile, Anton Du Beke – who was eliminated in the show’s first week – described Seann and Katya’s antics as “shameful”.

Do you think Seann and Katya deserve to stay on the show? Leave us a comment on our Facebook page @EntertainmentDailyFix and let us know what you think!