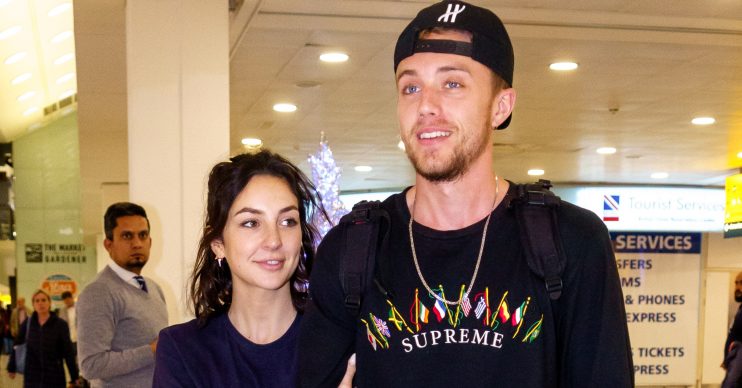 He's gone back to work already!

Roman Kemp – who came third in this year’s I’m A Celebrity – returned to work to a hero’s welcome today (December 12).

After touching down in London with girlfriend Anne-Sophie Fluri by his side, Roman slept off his jetlag and headed to Capital Radio, where he presents the breakfast show.

He was greeted by his co-hosts Vick Hope and Sonny Jay, who had given the studio a jungle-themed makeover.

He’s a celebrity… Get @romankemp in that studio!

Also in the studio was Anne-Sophie – who was mysteriously absent on the bridge when Roman left I’m A Celebrity – and the couple’s dog Luna.

Back behind the mic, Roman revealed just why the viewers at home didn’t see Anne-Sophie on screen as he left the camp.

He told listeners that Anne-Sophie’s appearance was actually cut by producers.

Roman said: “Everyone thought that Soph didn’t meet me on the bridge.”

Co-host Vick asked: “Yeah you just didn’t see it because it was cut out – I think they were tight for time or something?”

Roman revealed: “Yeah they were really tight for time because obviously it was the final one but she was there!”

He added that the “second he saw” Anne-Sophie he asked if he’d “said anything wrong” while on the show.

Anne-Sophie had earlier taken to her Instagram to tell worried followers that all was well and she was indeed there for Roman’s exit.

She wrote: “I was there – scene was cut. Kind of glad cause I had far too many frozen margaritas last night.”

They were really tight for time because obviously it was the final one but she was there!

Roman and Anne-Sophie have been dating since early 2018 having met on Tinder after he liked one of her Instagram pictures.

And, if ITV plays its cards right, they could just have another Kemp in the jungle next year after Roman’s dad Martin revealed he’d love to do the show.