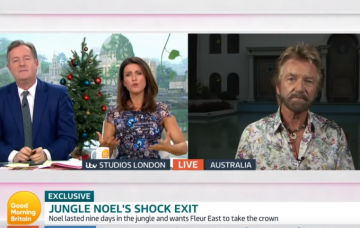 Noel Edmonds’ rumoured six-figure sum for doing I’m A Celebrity has been a hot topic and Piers Morgan decided to probe the star about it, but Noel was having none of it!

Noel appeared on Good Morning Britain on Monday to talk about his experience in the Australian jungle, after being the first celebrity voted out.

He started off by asking hosts Piers and Susanna Reid if they could drop the subject about money, however, Piers insisted on asking the presenter about his supposed £600,000 pay packet.

Piers told the Deal or No Deal star: “No, let’s talk about the money. I have always said I would never do I’m A Celebrity with all the kangaroo testicle munching and so on, unless I got paid an unfeasible amount and can guaranteed I got kicked off first. Which is what’s happened to you.

“It makes your day rate one of the best in TV history!”

But acid-tongued Piers, 53, met his match as Noel, 69, quickly shut him down!

He replied: “Piers please. The only thing I could recommend, looking at you, was the weight loss.

It’s been reported that Noel, who is estimated to be worth around £75 million, was paid the highest sum any celebrity has ever been given in the history of the show.

If that figure is correct, it means he would have received around £60,000 a day in camp.

That definitely makes munching on bugs and being covered in critters seem more appealing!

Money aside, Noel has repeatedly said how “grateful” he is for the experience he had on I’m A Celebrity and that he was “sad” to leave first.

He recently joked he would do the show for £10 million.

During an episode of Good Morning Britain last month, Piers was shown a clip of I’m A Celebrity presenters Declan Donnelly and Holly Willoughby saying that he could never take part in the series because he does not have the “guts for it”.

Holding a tarantula on his hand, Piers said: “This is how many guts I’ve got, Declan Donnelly.