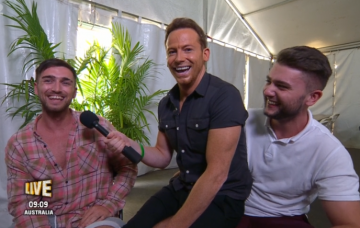 He appeared on Extra Camp with his brother

I’m A Celebrity viewers can’t get over Nick Knowles’ “hot” son Charles after he appeared on Extra Camp.

Charles and Nick’s other son TJ, 24, appeared on last night’s show alongside the family members of the other campmates to talk about their dad’s antics in the jungle.

The pair joked about their dad’s constant singing during last night’s show after he was told his song, Make You Feel My Love, had made it to number one in the iTunes chart.

Read more: Nick Knowles’ son Charles slams claims he is being ‘fake’ on I’m A Celebrity

Host Joe Swash asked Charles whether Nick’s song making it to number one will affect his “mindset” in the jungle.

Charles joked: “He was singing a lot wasn’t he? He started going on a bit, I think the campmates were getting a bit tired of it towards the end.”

Joe then moved on to ask Charles and TJ about their dad’s tiny red speedos he wears around camp.

TJ said: “We’ve never seen them before, we don’t know where they’ve come from.”

Charles added: “Bloody hell really. What do you say about that?”

Joe joked: “I’ll tell you what, if you take after your dad, you’re lucky, lucky boys.”

Viewers watching from home were left swooning over Charles and took to Twitter to share their thoughts.

A third added: “Nick’s son, Charles though. Hello there,” followed by heart-eyes emojis.

Read more: Emily Atack rules out ‘romance’ with Nick Knowles because he’s “too old” for her

Earlier this month, Charles hit back at critics who argued that Nick, 56, is “acting Mr Nice guy” and being “fake” to his fellow campmates in a bid to win over viewers and take the jungle crown.

The 25-year-old told The Mirror: “There will always be a negative side when someone is being nice and kind to people. That’s the line of work he is in.

“We know this is how dad is and he will always help others. Even if others doubt him for doing it. He always says you don’t do things for a medal you do it because it’s the right thing to do!

What do you think of Nick’s son Charles? Leave us a comment on our Facebook page @EntertainmentDailyFix and let us know what you think!