John Barrowman is reportedly in talks to co-host I'm a Celebrity: Extra Camp with Emily Atack.

Following the news that Scarlet Moffatt and Joe Swash quit the ITV2 show, it was reported that the former Inbetweeners actress was being eyed for the role alongside Joel Dommett, who is staying put on the show, after winning over the nation with her "bubbly personality" during her stint in the I'm A Celebrity... Get Me Of Of Here! jungle last year. 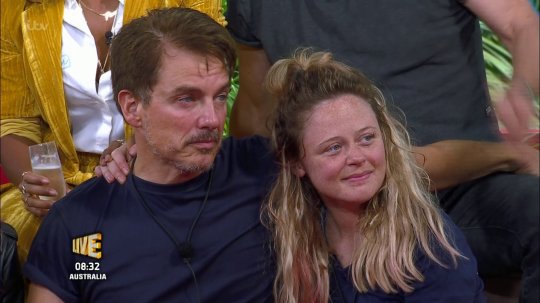 Emily and John could host Extra Camp together (Credit: ITV)

And now an insider has claimed Emily is set to be reunited with her campmate from the 2018 series - which saw Harry Redknapp crowned King of the Jungle - on the spin-off programme.

A source told The Sun newspaper's Bizarre TV column: "Producers loved John and Emily together last year and were looking for formats for them once they left Australia.

"When the chance to do Extra Camp came up ITV bosses thought it made sense.

"Joel can hold it together, as he’s done the show before, and the newbies can bring their own madness to the table. It’s all but a done deal."

Joe announced his departure from Extra Camp after a decade to spend more time with his family after he and Stacey Solomon welcomed their first child together, Rex, in May.

The father-of-two - who also has 12-year-old son Harry with his ex-fiancée Emma Sophocleous - wrote on Instagram: "I can't believe I'm about to say this ... For 10 incredible years I've been lucky enough to host my favourite show on telly.

The newbies can bring their own madness to the table.

"I don't want to miss a second with Stacey and our amazing boys so 3 months in Australia just seems too [much] to bare this year."

He added: "I’ve made some unbelievable friends… in fact family… in Oz and I’ll miss you all terribly. @antanddec thank you boys for showing me how it’s done and keeping me on my toes, I’ll be watching every night, missing you both!

@itv @thismorning we are loving it!!!! @emilyatackofficial jb

"Well It’s not goodbye forever but just for now. Thanks for the memories @imacelebrity it’s been emotional."

And Gogglebox star Scarlett - who joined the spin-off show in 2017, after being crowned Queen of the Jungle the year before - revealed she is working on a mystery project with her family.

She said on Instagram: "The jungle absolutely changed my life and I am massively grateful to everybody who voted for me whilst in the jungle and for your constant support to date and everybody who tuned in to extra camp.

"I will certainly be tuning in LONG LIVE THE JUNGLE."