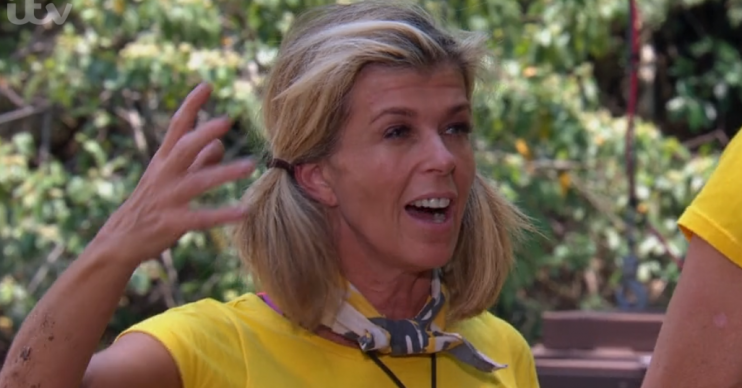 Dec didn't know where to look

Presenter Kate Garraway has shocked I’m A Celebrity… Get Me Out Of Here! viewers by revealing the nickname she uses for her private parts.

Viewers were thrilled last night (18.11.19) as the show treated them to the first bushtucker trial of the series, putting Good Morning Britain’s Kate and American reality star Caitlyn Jenner up high in boxes filled with nasties.

The aim of the game was to win as many stars as possible for their camp by dropping coloured balls into a moving bucket.

In typical I’m A Celeb fashion, both women had to endure being swarmed by rats and thousands of creepy crawlies.

Kate was struggling to concentrate on the balls and began to panic as she felt the bugs crawling up her “noo noo”.

She screamed: “Don’t go up my noo noo! They’re going up my noo!”

When the camera cut to hosts Ant McPartlin and Dec Donnelly, the latter could only stand looking awkwardly at the camera.

Kate said it again when the task had ended and Dec joked that crew member Bob needed to “bring the other tweezers”.

Viewers reacted to the revelation on Twitter, with one tweeting: “Not everyday you hear Kate Garraway saying she got one in the noo noo.”

They’re going up my noo!

Someone else wrote: “Who the chuff calls their tuppence a noo noo?! #KateGarraway #ImACeleb.”

A third said: “‘Why they going up my noo noo?’ Kate, sweetheart they are bugs, I’m pretty sure they don’t wanna go there, they just trying to get away from ya.”

Another commented: “Nothing worse than a cockroach up your noo noo I bet!”

Who the chuff calls their tuppence a noo noo?! #KateGarraway #ImACeleb

"Why they going up my noo noo!"
Kate sweetheart they are bugs, I'm pretty sure they don't wanna go there, they just trying to get away from ya 🙄 #ImACeleb

Nothing worse than a cockroach up your noo noo I bet! 😂🙈😈 #ImACeleb

Caitlyn also had to deal with an insect in an orifice – and when the task ended, needed brief medical attention.

The former Olympian feared there was a bug in her ear and a member of the team had to come and flush it out with a syringe.

Elsewhere in the second episode, radio DJ Roman Kemp moved his campmates and viewers at home as he spoke about his parents.

The 26-year-old also opened up about his parents’ long and happy friendship with late singer George Michael, who was Roman’s godfather.

But it was his stirring tribute to Spandau Ballet dad Martin Kemp that visibly moved the likes of Kate Garraway, Nadine Coyle and Myles Stephenson.

Are you enjoying I’m A Celeb so far? Leave us a comment on our Facebook page @EntertainmentDailyFix and let us know.