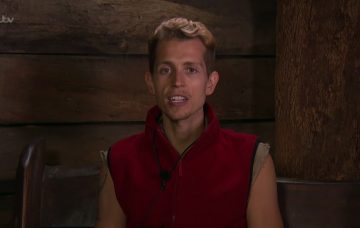 He's lost a lot of weight

The Vamps star James McVey has shocked I’m A Celebrity viewers with his weight loss in the jungle.

The celebs have to get used to small portions on the show but James has apparently been giving some of his food away to one of his campmates.

It’s been said that the 24-year-old has kindly been offering some of his food to older campmate Harry Redknapp to help keep his strength up, as there are reportedly worries the 71-year-old won’t be strong enough if he reaches Sunday’s final.

Other campmates have admitted that football coach Harry has been struggling to eat in camp because of the unusual ingredients they are given to cook, such as emu and camel.

As a vegetarian, James – who has previously battled an eating disorder – has even less options in the jungle and viewers have shared their thoughts on Twitter.

Another added: “@TheVampsJames has been giving half his veggie food to Harry every night so he has enough to eat. He’s honestly the sweetest and deserves to stay #TeamJames #imaceleb.”

@TheVampsJames has been giving half his veggie food to Harry every night so he has enough to eat. He’s honestly the sweetest and deserves to stay #TeamJames #imaceleb

A third wrote: “Has @TheVampsJames lost a lot of weight or am I just seeing things?! #ImACeleb.”

Has @TheVampsJames lost a lot of weight or am I just seeing things?! #ImACeleb

James’ girlfriend, model Kirstie Brittain, has opened up on the matter.

She says James has been sharing his grub with Harry because he sees him as a “grandfather” figure.

She told The Sun: “James is being generous with his food, giving it to Harry because Harry is struggling so much with all the meats.

“James is veggie so he’s giving Harry half his veg, which is why he’s gotten so skinny.

“James was slim when he went in so he’s lost a lot of weight. Sair Khan told me how generous he has been. We’re not seeing it on screen.”

It is the couple’s anniversary this week, their first one apart. And Kirstie posted a sweet message for the star on her Instagram.

James has been doing well on I’m A Celebrity so far, but we hope he has enough strength to reach the final too!

Do you think James could go all the way? Leave us a comment on our Facebook page @EntertainmentDailyFix and let us know what you think!