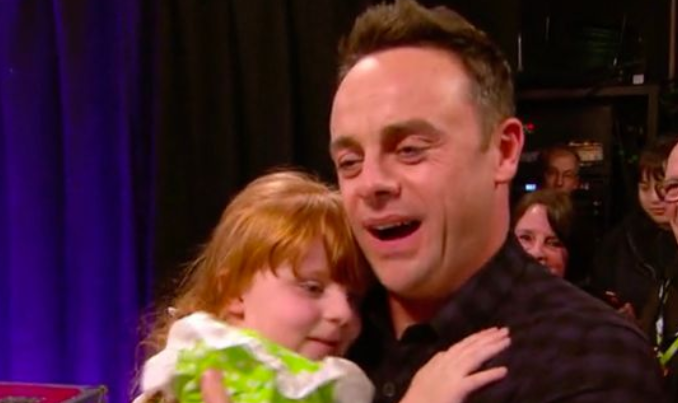 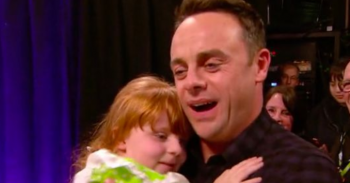 He made his return to TV on Saturday night

Troubled TV star Ant McPartlin made his return to Britain’s Got Talent last night (April 6) and an adorable little girl gave him the greatest welcome back.

He pressed his golden buzzer sending them straight through to the semi finals of the ITV show.

“It was so moving, I don’t know why it is so moving,” he said. “It was one of the most joyous things I have ever seen.

Read more: Britain’s Got Talent viewers give their verdict on Ant’s TV return

As the kids from the Lancashire school ran off stage, five-year-old Emily immediately hugged Ant, who has been in recovery after being arrested for drink driving last year.

Hugging him, the little girl sobbed: “I’ve missed you.”

One tweeted: “This little girl speaks for the nation when she says she missed Ant.”

Another added: “I think Ant got a bit emotional when that little girl said she’d missed him. Good to see you back.”

“Great to see you back Ant. That little lass on #BGT said what millions wanted to say #WeveMissedYou #AntsBack #WereAllHuman,” said a third.

And a fifth wrote: “Emily is absolutely adorable! I am so happy she said that to Ant because we all agree with her and I think it was amazing for Ant to hear. Well done Emily.”

Lots of fans were happy to see Ant and Dec reunited on screen for the first time since his arrest which saw him enter rehab to tackle his addiction to painkillers.

His marriage to Lisa Armstrong also collapsed during a difficult year which saw him take a break from presenting as he battled his demons.

But fans were happy to see him back at work.

One tweeted: “Ant & Dec back together presenting on BGT has made my weekend.”

While another added: “Great to see you back on our screens @antanddec… You’re only human like the rest of us Ant.

Are you happy to see Ant and Dec back together again? Join the conversation on our Facebook page.