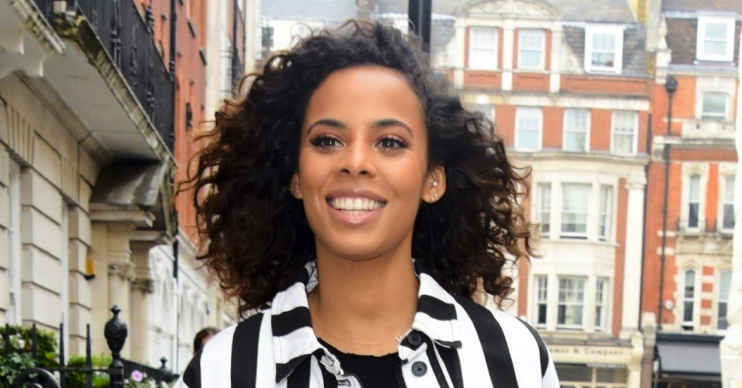 Rochelle Humes won’t forget her appearance on today’s Sunday Brunch in a hurry, after she suffered an embarrassing wardrobe malfunction.

The former Saturdays singer, 30, was forced to change her outfit during the ad break as a result of busting her zip earlier in the programme.

Speaking about the incident later in the show, Rochelle told viewers that she’d “breathed out too much”.

Read more: Rochelle Humes stuns fans as she shows off bikini body during holiday with husband Marvin and kids

At the beginning of the programme, Rochelle was seen wearing an oversized dark denim jacket with a white T-shirt underneath.

But in the second half, as she prepared a poached egg dish with presenter Simon Rimmer, she was kitted out in a completely different outfit.

Showing her hands to the camera, she revealed that her palms were covered by the material of her new, stretchy black top.

The TV fave smiled: “Well, this isn’t very good for cooking, is it? I’m all trapped!”

And that’s when Rochelle confessed what had happened. She explained: “Well, you might’ve noticed I got changed.

“I had denim on and I just breathed out a bit much. I popped my zip, so I quickly got changed in the ad break.”

While she was on the show, Rochelle also seemed to scotch rumours that her husband Marvin’s pop band JLS are making a comeback.

And her comments didn’t go down well with some of the viewers at home.

One fan tweeted: “Rochelle just said on Sunday Brunch that the JLS reunion is something that the papers have picked up on, and they don’t have intentions of doing a concert. Cheers, son’s crying.”

Another wrote: “I can’t believe I got so excited for JLS coming back, for Rochelle to go on Sunday Brunch and actually crush my dreams. I’m literally crying.”