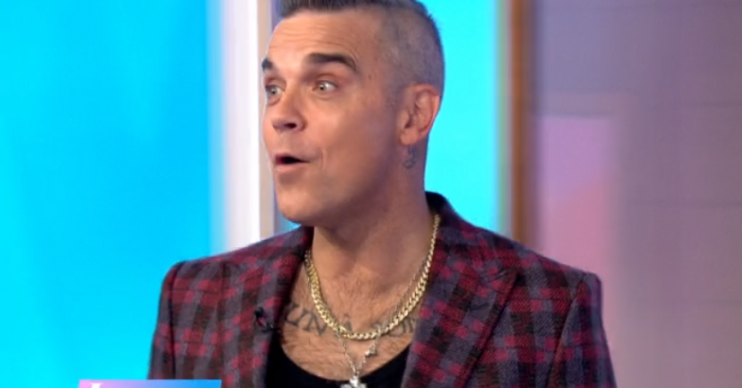 He just wanted to see Ayda

Angels hitmaker Robbie Williams had the Loose Women panel and audience members in stitches after walking onto the set at the wrong moment.

On today’s (29.11.19) episode of the daytime chat show, the former Take That star’s wife Ayda was on as a guest panellist.

Shortly after presenter Kaye Adams introduced the segments, heads turns as Robbie suddenly walked into the studio to cheers from the audience.

He smiled as he approached the panel and former X Factor judge Ayda told him: “You’re not on yet!”

Robbie, looking bemused, asked: “It’s not live, is it?”

I just wanted to see my wife!

“You’ve started!?” Robbie said, stunned at his own blunder.

Everyone burst out laughing and he apologised, grinning as he walked off the set and told the cameras: “I just wanted to see my wife!”

Robbie was back on as a guest later in the show and discussed his relationship with Ayda, whom he married in 2010.

Asked about his feelings on Christmas, because of the recent release of his festive album, The Christmas Present, Robbie said: “[It] has gone like this for me – I loved Christmas as a kid, and then you love Christmas as a teenager and a late teenager because you go out boozing.

“Then I had to stop boozing, and Christmas becomes a symbol of what’s wrong with your life. Because everything on the TV is going, ‘Hey, you should be loving this, everything’s amazing, family is great’, and you go, ‘Well, I feel bereft of happiness and joy’. And it just makes everything worse. But you’re sort of left to deal with your own demons and all of that business.”

Robbie, who recently amazed fans in a picture taken with his ‘lookalike’ dad, continued: “And then, Ayda. She’s like a professional memory maker. She just makes every anniversary, birthday, every Christmas absolutely incredible.”