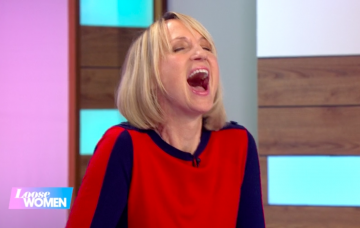 The TV star was very laidback about her big day

It was the moment we’ve all been waiting for and on Thursday’s Loose Women, Carol McGiffin finally opened up about her secret wedding – and she had a HUGE diamond ring to show off.

The TV star admitted she’d married her long-term fiancé Mark Cassidy a year ago, telling the panel: “It was special.”

Introducing the special Valentine’s Day edition of the ITV show, fellow panellist Christine Lampard told Carol, 58, that she “had some explaining to do”.

The giggly TV star waved her ring finger at the audience, as panellist Jane Moore told her she had “fundamentally lied” because she hadn’t told them about the wedding.

After a bit of ribbing from her co-hosts – which also included Chizzy Akudolu – Carol admitted her big day “was special,” adding: “We got married in Bangkok.”

Carol shared a photo with the presenters, showing her wedding day had been low-key.

She wore black-and-white trousers with a denim jacket.

And Carol admitted to Chizzy there wasn’t even a wedding cake.

She also revealed how she and toyboy Mark, 36, had returned to Thailand for their first wedding anniversary recently – where they DID have cake.

When the panel asked about the ring, Carol showed it off again, saying: “I can wear it, yeah! I’ve been wearing it when I’m out of the country, but I haven’t worn it here.

“I kept forgetting and I kept wearing the ring. And I thought I was getting caught out.”

It’s the third time the pair – who got engaged back in 2008 – have tried to get married, with Carol revealing: “We’d booked a register office in London for 19 January 2017, but sadly my sister died five days earlier so, of course, we cancelled it.

“We re-booked it but then changed our minds because it still didn’t feel right – it was too soon.”

Carol confirmed the happy news to fans on Tuesday, sharing the cover of Best magazine with the wedding headline.

She wrote: “We sure did! #married #bangkok #firstanniversary @cassola21 Thanks all for your lovely messages of congrats! x.”

Speaking to Best, Carol explained: “No one knew we were going to do it , but we’ve basically spent the last year having separate celebrations with different friends and family, telling them all in person.”

Her followers loved it, telling her: “Congratulations to you both! Lovely news!”

Another added: “Congratulations @the_mcgiff well done for keeping the secret 🍾🍾🍾.” While a third gushed: “OMG [you’ve] just gone and done it!! About time can I just say!! Congrats Mark & Carol, lovely news to wake up to!!”

Are you shocked by this news? Leave us a comment on our Facebook page @EntertainmentDailyFix and let us know what you think.