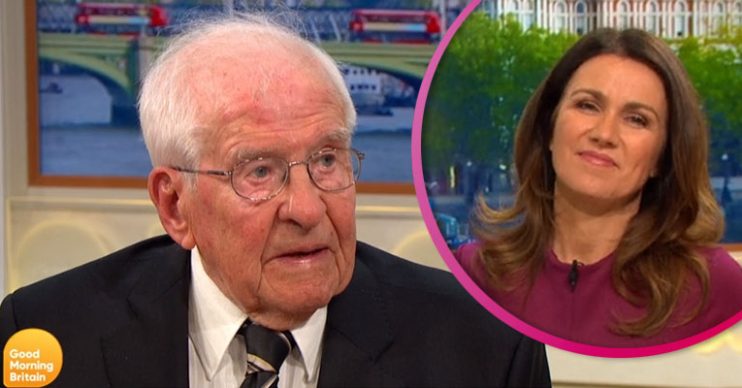 We’ve got some bad news for First Lady Melania Trump. The World War Two veteran who flirted with her last week has moved on – to Good Morning Britain host Susanna Reid.

Thomas Cuthbert hit the headlines when he met President Trump at the recent D-Day commemorations and proceeded to flirt with his wife.

Shaking Melania’s hand, he told President Trump: “If I was 20 years younger!”

Now, appearing on Good Morning Britain, it seems the flirtatious 93-year-old has set his sights on newly-single Susanna.

Speaking to Susanna’s GMB co-host Piers Morgan, Thomas opened up about why he made the flirty comments to Melania.

He admitted: “She is a very attractive lady, that’s what it was. Much taller than me though.”

Read more: Will and Kate send a cute birthday message to Prince Philip

However, Piers revealed that Thomas doesn’t only have eyes for Melania.

He said: “Thomas, I’ve got to say in the little break there, when you met Susanna, there was a big hug and a kiss, you were basically saying the same thing to her – you remind me a bit of Melania Trump.”

“She’s as beautiful as her,” the war veteran quipped, as Susanna blushed.

When Piers informed the nonagenarian that Susanna was single and ready to mingle, Thomas replied: “Oh is she? Shouldn’t be [for] long.”

Susanna split from Crystal Palace FC boss Steve Parish in April, but will soon be off the market if Thomas has anything to do with it!

However, Susanna did have good news for Thomas as she revealed that the feeling is mutual.

Ending the chat, Piers gestured towards Susanna and quipped: “If you play your cards right Thomas…”

“Yes, I might be alright,” he laughed, with the pair joking that Melania would be “watching at home saying: ‘Hands off he’s mine!'”

What do you think of the flirty war veteran? Head over to our Facebook page @EntertainmentDailyFix and let us know!