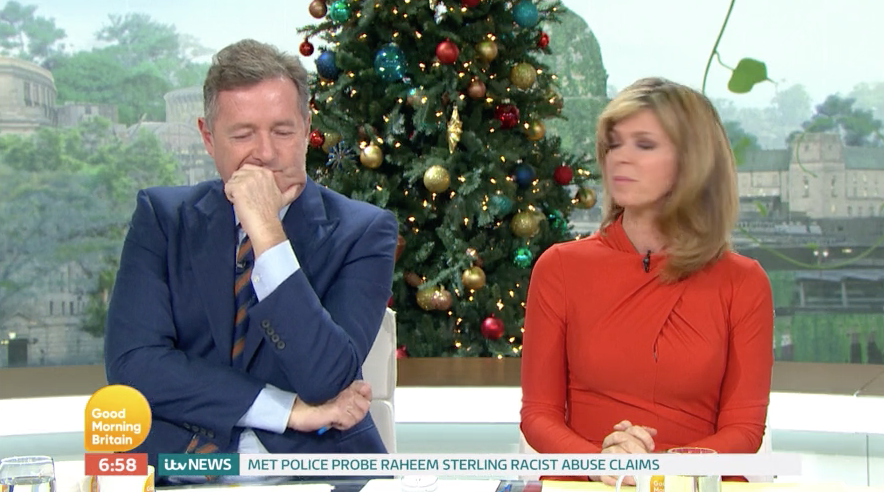 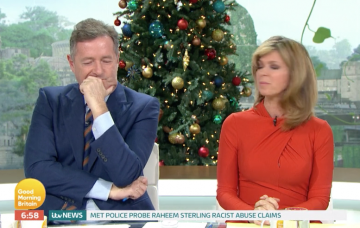 He was taken by surprise, in his defence!

Piers Morgan was forced to apologise after exclaiming: “Bloody hell!” live on Good Morning Britain after seeing a flying Santa.

The TV host blurted out the expletive in shock as he was about to interview Bear Grylls.

He was left gobsmacked when a man in a Father Christmas outfit suddenly appeared in the background doing somersaults in the air in an indoor skydiving chamber.

Kate Garraway, who was covering for regular co-presenter Susanna Reid on today’s show, was shocked by his outburst.

She joked: “Piers Morgan! What have I done to you?! You need Susanna Reid to keep you in check.”

He replied: “Sorry but literally Santa Claus was flying up and down!

Read more: Piers Morgan’s colleagues reveal how they cope with his rants

“I thought we’d lost him. There was a moment of exclamation.”

Even before Kate pulled him up for his temporary loss of verbal control, Piers immediately apologised, saying: “Bloody hell! Sorry.”

Survival expert Bear was on the show to encourage children to sign up with the Scouts and was speaking from his adventure experience at the NEC in Birmingham.

Kate asked him: “What are you doing to Father Christmas?”

Bear replied: “Well, we’re getting Santa ready for Christmas. Rumour had it that Santa was getting a bit out of shape this year so we thought we’d put him through his paces.

“We’ve got him in the wind tunnel behind us here, getting him used to falling through the sky.

“We’re going to take him on the climbing wall because he’s got to get up those roofs and down the chimneys.

“The one thing we don’t want to disappoint on is Christmas.”

* Good Morning Britain is on ITV weekdays at 6am.

Were you shocked by Piers’s outburst or was it Piers just being Piers? Leave us a comment on our Facebook page @EntertainmentDailyFix and let us know what you think!