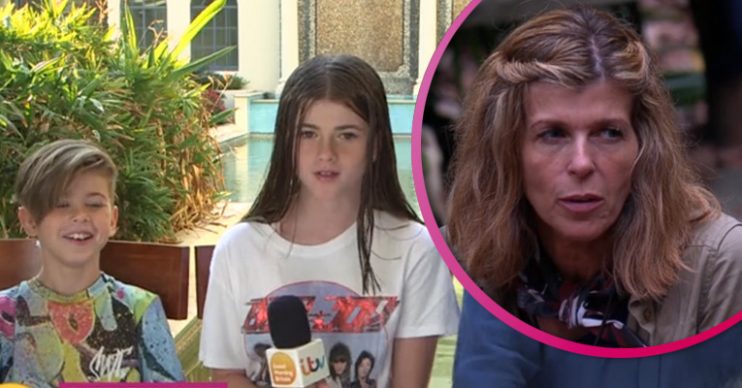 They're still supporting their mum in the jungle

Darcey, 13, appeared on Wednesday’s Good Morning Britain and said that even though she’s backing her mum to win the show, she believes former footballer Ian will be crowned King of the Jungle.

Sat alongside her brother Billy and their dad, Kate’s husband Derek Draper, the kids were asked whether they think their mum could win the show.

Darcey replied: “We support her fully but I have got a bet on Ian Wright.”

We support her fully but I have got a bet on Ian Wright.

Darcey also echoed her comments on Lorraine, saying she believes Ian’s “got it in the bag”.

She said: “I did [bet on Ian Wright]. I really hope mum wins but I think Ian’s got it in the bag to be honest.”

“I think Ian’s got it in the bag to be honest.” @kategarraway‘s children tell Lorraine how proud they are of her #ImACeleb journey, but aren’t convinced she’ll bring home the crown 😂 pic.twitter.com/SWnLbTq0f3

Meanwhile, over on GMB, Piers Morgan asked Derek whether he believes Kate stripping down to a bikini was a “deliberate strategy” to bag more votes.

Derek said: “Genuinely she took a few bikinis with her and she said to me, ‘I’m not sure these bikinis will see the light of day.’

“I said, ‘Well please make sure they do because you look absolutely stunning.'”

He added: “I think we’ve seen the bikini tops. She had a towel round herself. I think it’s linked to her confidence Piers and how good she’s feeling.

“And I do wonder if by the end we will see the whole bikini.

“I know you’re cynical about it being about votes but I think it’s more about how good she’s feeling.”

Earlier this week, Darcey and Bill admitted they would rather have Kate’s campmate Myles Stephenson as their dad rather than Derek.

Myles recently admitted he has a crush on Kate, 52, and has previously slept with a woman older than the presenter.

Speaking in the Bush Telegraph, Kate joked: “I think he might have been being kind – that was his charity work for the year!”

Darcey and Bill discussed Myles’ comments about their mum and were keen on the idea of him being their new dad.

During another appearance on GMB, Derek asked his kids: “What did you think about what Myles was saying about mum?”

.@kategarraway‘s family have mixed feelings about @MylesRakSu‘s revelation that he’s got a crush on our GMB presenter. 😲😲 pic.twitter.com/4ij2eTxAUi

Derek asked: “Who would you rather have as your dad? Me or Myles?” and without hesitation both kids said Myles with Darcey adding: “Hands down!”