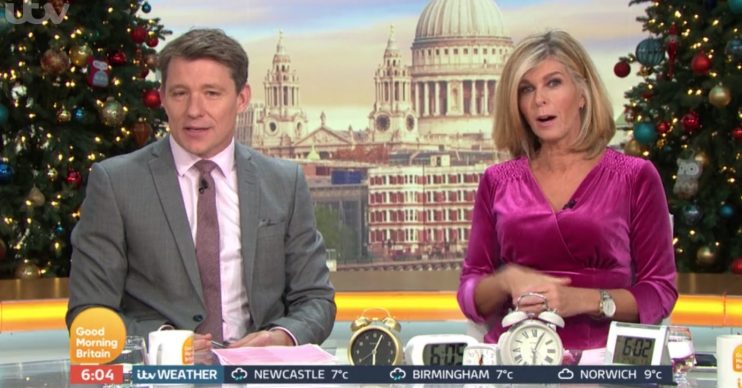 A viewer spotted him!

Breakfast TV host Kate Garraway was left red-faced when she overslept and missed her first day back on Good Morning Britain after her stint on I’m A Celebrity.

On Thursday’s show, the presenter called into the show via video call and took viewers on a virtual tour of her house.

However, during the FaceTime conversation, her husband, Derek Draper, was spotted NAKED in a mirror.

Joining co-hosts Ben Shephard, Richard Arnold and Charlotte Hawkins back on-set this morning (20.12.19), Kate, 52, explained that she tended to her ill son before falling asleep with her shoes and make-up on and woke up at 5.40am, which was too late to make it into work.

It revealed her husband Derek’s naked form reflected in a mirror.

“He woke up thinking it was two in the morning, and wondering, ‘why has she woken the whole house up’,” Kate explained.

He stormed down the stairs without his glasses, and naked!

“He stormed down the stairs without his glasses, and naked!”

Ben explained that a very eagle-eyed viewer spotted his reflection in the mirror.

“I turned the camera away quickly to save everyone’s blushes,” Kate laughed.

After her oversleeping drama, Kate appeared on yesterday’s show via video call and put her hand over her mouth before saying: “Listen, I’m going to get fired. I can’t believe I’ve done this.”