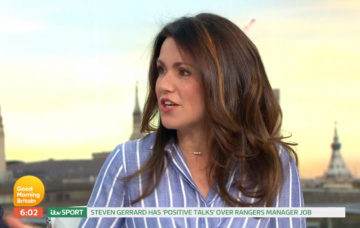 He jokingly "fat-shamed" the presenter on Tuesday's show

Susanna Reid has received a present from Tyson Fury after she joked he had ‘fat-shamed’ her on Good Morning Britain.

On Tuesday’s show, Tyson suggested that Susanna, 47, should switch from white coffee to black if she wanted to drop a few pounds, although pointed out she didn’t need to.

Speaking on today’s show, Susanna revealed Tyson had sent her a tin of coffee with some milk and a note which told her she already “looks great.”

“I have received a lovely present from Tyson Fury,” Susanna told viewers. “It’s some coffee and crucially, it comes with milk.”

Piers said: “Well he suggested yesterday that you should drink black coffee – you’d already fed him a suggestion that you wanted to lose weight… which obviously you don’t.”

“I know, poor guy!” Susanna replied, as Piers added: “He then got trapped into following the banter.”

Susanna continued: “He said you should drink black coffee and then you’ll lose some weight… and now he’s been hammered for fat-shaming me.”

Her present came with a note which read: “To Susanna. Keep drinking it white, you look great on it.”

Susanna went on to reveal how her diet is going.

“I was going to do the black coffee, low carb diet and I went to the gym but then I came home and ate a whole packet of fruit shortcake and loads of toast,” she quipped.

This all came after Tyson accidentally put his foot in it on Tuesday’s show.

The former heavyweight champ, 29, was speaking about how he managed to shed almost four stone since returning to training.

Tyson asked Susanna: “What kind of coffee have you got there?”

After revealing she was drinking “white coffee,” Tyson replied: “Well change it to a black coffee and you’ll lose a bit [of weight]…”

“Not that you need to!” he quickly added.

Susanna then quipped: “I just got fat-shamed by Tyson Fury.”

“Wow Tyson. You old charmer,” Piers added. “You were doing so well Tyson. Right at the death.”

Tyson, meanwhile, shared a photo to Instagram showing himself and Susanna on GMB, alongside a heart emoji and the caption: “Hope she liked my gift to her.”

@susannareid100 & I looking very well on yesterday’s @gmb show, Hope she liked my gift to her.❤️😍