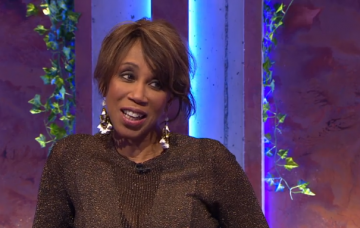 Looks like someone is expecting more from Andrea McLean and co!

Trisha Goddard made a cheeky dig at Loose Women during an appearance on last night’s Celebrity Big Brother’s Bit On The Side.

The legendary talk show host had Rylan Clark-Neal laughing as she threw out a suggestion for the ladies of the ITV lunchtime show.

Bit on the Side host Rylan introduced Trisha and said: “This bunch of housemates is very different to what we’re usually used to.

“So far it’s been more politics than partying. How interesting are you finding the mix?”

Trisha – who recently celebrated her 60th birthday – replied: “I think it’s absolutely fantastic. In fact, I think Loose Women could take a leaf out of their book!”

“Shady, over there!” came Rylan’s reply.

Rylan carried on, saying: “What other show would you get a former shadow health secretary and glamour model having a chat in the kitchen?”

Of course it was all just a bit of banter – what else would you expect on BOTS, right?

Elsewhere in the show, in a short video clip, housemate Jess Impiazzi – 28 – said that she found older housemate Ann Widdecombe, 70, fascinating, and wanted to be more like her.

So Rylan asked Trisha what Jess could learn from Ann. Trisha laughed: “I just answered that! Look, Jess is one of those people who wants to be wherever she feels the power is.

“Once those guys get in the house, trust me – she will not want to be like Ann, or Rachel.”

“Trisha’s come back with a bit of sass this year!” exclaimed Rylan.

Quite right too, we were loving Trisha’s input last night!