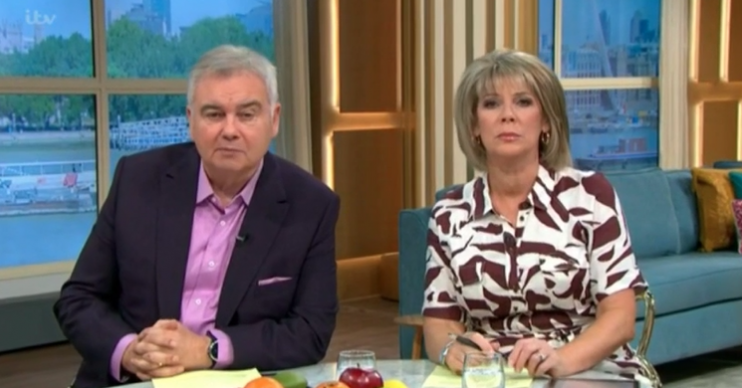 Eamonn said his wife is feeling "under the weather"

TV’s Ruth Langsford has pulled out of today’s This Morning (March 13) due to illness.

The presenter hosts the Friday editions of the programme alongside her husband Eamonn Holmes.

But Eamonn revealed on Friday morning that Rochelle Humes will be standing in for Ruth as she’s feeling “a bit under the weather”.

In 4 Ruth today. The Bad news is @RuthieeL is a bit under the weather 😒 The good news is Rochelle is not. 👏👍😁 So we r together from 10am on @Itv . Hope u can join us. pic.twitter.com/La25eOTu5b

He wrote on Twitter: “In for Ruth today. The bad news is @RuthieeL is a bit under the weather. The good news is Rochelle is not.

The bad news is Ruth is a bit under the weather.

Fans were concerned for Ruth, especially amid the coronavirus outbreak.

One person said: “Is @RuthieeL self isolating? Wish her well.”

Another wrote: “Eamonn – Is she having a test for Coronvirus,” while a third tweeted: “Seven days self isolation??”

A couple of weeks ago, Rochelle stood in for Ruth again on the daytime show as Eamonn revealed his wife had other things to do.

Rochelle said: “You say the same thing every time and I tell you not to!”

Eamonn added: “Ruthie’s got other things to do today so she can’t be here today but Rochelle and I are pairing up!”

Former Saturdays singer Rochelle then joked she was the perfect choice to fill in for Ruth because they could keep the This Morning mugs in place for her.

She said: “I always say they don’t have to change the mugs, the cups can stay the same – E and R. It works, we like it. I’m Mrs Holmes for the day!”

Speaking to the MailOnline at the TRIC Awards on Tuesday (March 10), Eamonn said: “It’s been a very busy year for her and a very difficult year for her.

“So our concern is just to nurse her through the year and make sure she’s OK.”

Julia – who battled depression for several years – was found dead at age 62, by her husband Paul at their home in Surrey last summer.