Holly Willoughby and Phillip Schofield were forced to cook on This Morning today as the show's chef Gino D'Acampo was sick.

The duo showcased their cooking skills as they attempted to dish up crab pasta special crab linguine, accompanied by prosecco.

Following instructions written on a piece of paper, the pair began cooking the meal but it wasn't long before things turned chaotic and Gino phoned in to help them out. The pair had to fill in for Gino on the show (Credit: ITV)

Read more: Holly Willoughby in tears as Phillip Schofield presents her with an early birthday present

Holly told viewers: "Valentine's Day is this Thursday and we had enlisted a Gino to make sure the night goes without a hitch."

Phil added: "He's not here so we're going to do this for ourselves. For the first time ever, Holly and I are cooking on the air by ourselves.

"And because we can't be trusted, we have a medic on stand-by in case we burn ourselves."

The pair then started to cook the meal and as Phil took charge of the cooking, Holly took it upon herself to pop open a bottle of prosecco - but it didn't quite go to plan. 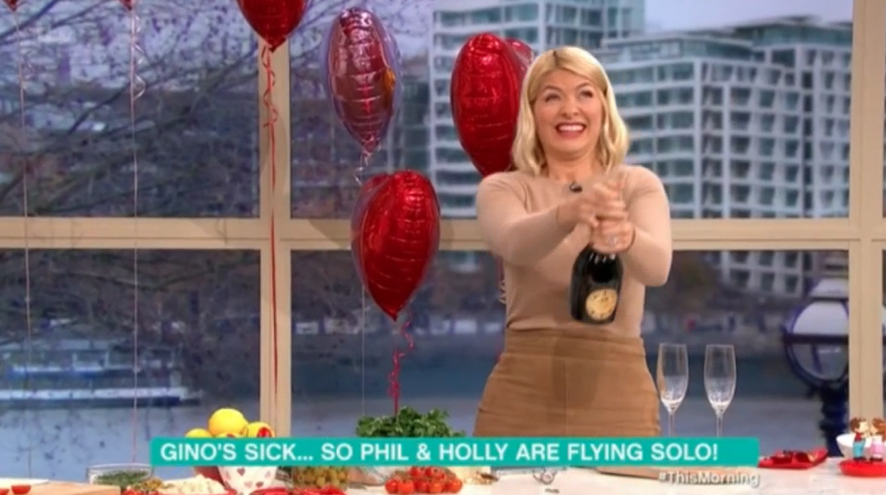 Holly almost hit the medic with the cork (Credit: ITV)

The cork flew across the studio and almost hit the medic.

Phil jokingly exclaimed: "You nearly hit the medic! We've knocked the medic out!" as the studio burst into laughter.

Gino then called into the show to help the pair out.

He raged: "How many times have I told you to stir the pasta? And the garlic and the chilli is burning. Don't tell me what it is because I can see it."

Because we can't be trusted, we have a medic on stand-by in case we burn ourselves.

Holly said: "Can you stop shouting. You don't sound nearly sick enough not to be here by the way!" Gino phoned in to help the pair out (Credit: ITV)

The chef then instructed the pair on making the meal and asked them to check if the pasta was ready to dish up.

Testing whether it was cooked, Holly picked up a piece and threw it at the set's fake window.

She said: "Do you know, the way you check it to make sure it's cooked, if you throw it and it sticks..." to which Phil shouted: "That's a plasma! It's not a real window!"

Gino exclaimed: "What are you doing?! That's not the way that's safe for the pasta," as Holly burst into hysterics. 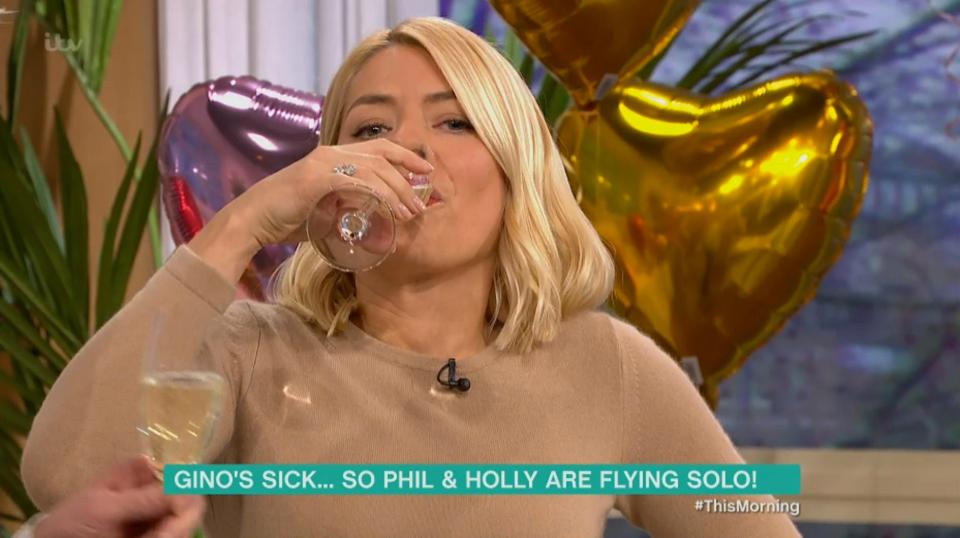 Holly then threw the pasta at the oven to "prove" her theory and it stuck.

The pair then plated up the food and tried their meal.

Holly said: "We are good and the pasta is cooked to perfection. Aren't we good?" as they cheered with their glasses of prosecco.

What did you think of Holly and Phil's cooking segment? Leave us a comment on our Facebook page @EntertainmentDailyFix and let us know.