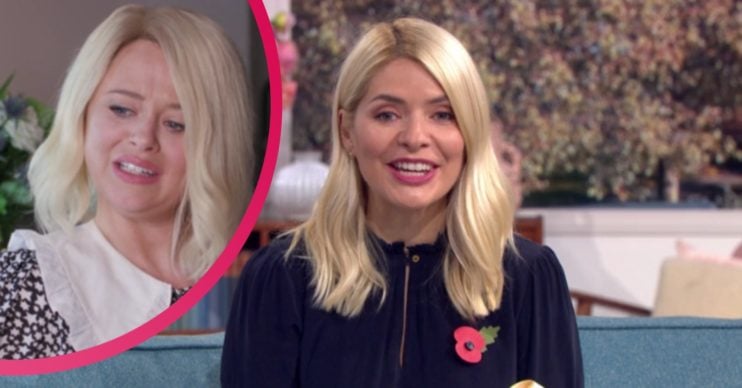 This Morning host Holly Willoughby was left in hysterics as Emily Atack impersonated her farting.

Th sketch show features a whole host of funny impressions, including a rather rude one of Holly.

In the sketch, Emily transforms into the mum-of-three with the help of a blonde wig and a pretty collared dress.

She nails Holly’s mannerisms before loudly breaking wind as the show heads into a commercial break.

The hilarious segment was played out on This Morning today (November 3) – much to the delight of the ITV star.

Speaking to Emily via video link, Holly said: “How did she know that in the breaks I have terrible flatulence?

Emily, 30, covered her face with her hands before going on to explain the funny impression.

The former I’m A Celeb star shared: “I made you do that because I thought to myself, when you think about the Queen for example, the one thing we can’t imagine the Queen doing is farting.

“Something I have always wondered, does the Queen fart?

“Then I thought, what is the one thing we can’t imagine the Queen of telly doing?

“I could have easily done a sketch about you laughing at a naughty joke, or giggling, but I wanted to do something that I cannot imagine you doing.”

Holly added: “Well farts are funny, they are always funny!”

Emily ended the chat by jokingly breaking wind as Phillip Schofield remarked to Holly: “Oh you just did?”

There’s something slightly different about Holly Willoughby on This Morning. We just can’t put our finger on it… 😂😂😂

For more comedy gold, watch The Emily Atack Show this Wednesday at 10pm on ITV2 and @itvhub@EmAtack @hollywills @thismorning pic.twitter.com/cajH0NVakh

Taking to Twitter, one wrote: “Emily Atack is the perfect lass, no question about that.”

Another added alongside a laughing emoji face: “Smelly Willoughby! #ThisMorning.”