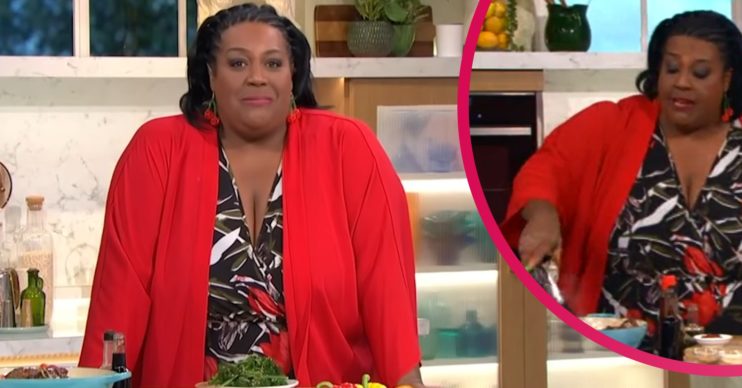 She was still brilliant though!

As she happily whipped up her mother’s famous pork chops for hosts Eamonn Holmes and Ruth Langsford, she ended up making a fair few errors that didn’t go unnoticed by those watching at home.

But Alison, is so popular, it didn’t bother people, they still thought she was hilarious. And Ruth and Eamonn told her the meal was delicious.

Alison Hammond cooks on This Morning

Alison announced she was cooking a recipe close to her heart in that it was one her late mum had taught her.

Eamonn’s mouth was watering as he said pork chops were his favourite.

At the start of the show Alison admitted she hadn’t cooked the pre-prepared one, but she proceeded to show viewers how it was done.

“I’m so glad I’m making this today, because the smell just reminds me of my mummy,” Alison said.

She went on to start throwing ingredients in and said her mum never gave her quantities, she just had a feeling of how much was needed.

Ruth then pulled her up as she said she was putting “two little spoons” of seasoning in – using a huge spoon.

“That’s not a little spoon, is it?” Ruth asked.

Eamonn joked they couldn’t put the recipe on the app because there were no measurements!

Alison then went to try and put something in the fridge, only to find there wasn’t one on the set. Carrying on regardless, she got the chops into the pan to brown – but ended up burning them.

“What we’re going to do is brown the pork chops, I’ll turn those over, let you see,” she said before showing the camera the somewhat blackened meat.

“It doesn’t matter if it’s black on the bottom,” she enthused, “because once we add the water, which is going to make the gravy, it’s just going to be amazing.”

She then said it needed a stock cube, which she threw in – and seemingly forgot to take the wrapper off!

What did Eamonn and Ruth say about her pork chops?

Eamonn suggested Alison’s cooking segments were so popular she should think of opening a restaurant.

But Alison said she was thinking about doing a cook book instead.

As Ruth and Eamonn tucked into the chops, Ruth said: “That’s delicious.”

“It’s lovely,” Eamonn agreed, “Maria [Alison’s mum] would be proud of you.”

What did viewers say about Alison Hammond’s cooking section?

Fans were quick to pick up on her mistakes, but it didn’t bother everyone – most people are still big Alison fans.

Alison left the paper on the stock cube #ThisMorning

Did Alison take off the wrapper for that stock cube? #ThisMorning pic.twitter.com/XZ0F2RP0FZ

It doesn’t matter if it’s burnt then Allison? #ThisMorning

Black on the bottom, #ThisMorning pic.twitter.com/nUBzhdF1L1

I’ve got my “small spoon” at the ready 😂 x pic.twitter.com/2Bdml6KBEs

This Morning continues week days at 10am on ITV.