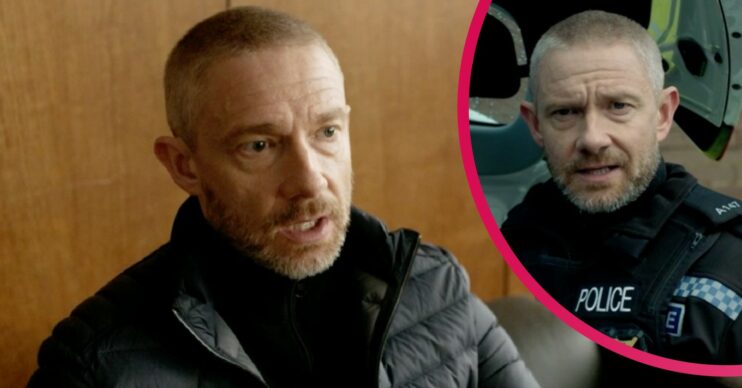 Many have already binged the series on iPlayer

The Responder viewers have been left begging the BBC for a series 2 of Martin Freeman‘s hit show.

The show has been a smash hit since it began airing in January, and many aren’t ready for the story to come to an end yet.

What is Martin Freeman’s show, The Responder, about?

Episode three of the five-part BBC show, The Responder, aired last night, and things are hotting up.

For those who don’t know, The Responder is BBC One’s new police procedural starring Martin Freeman in the lead role.

The drama takes place in Liverpool and follows Chris Carson (Freeman), a Merseyside Police officer, as he undertakes a series of night shifts.

Read more: The Responder on BBC One review: It’s bleak, but there’s a bittersweet pay-off

Chris is partnered up with Rachel Hargreaves (Adelayo Adedayo), an inexperienced officer who wants to play by the rules. Chris and Rachel soon discover that their survival in their high-pressure, relentless night shifts in Liverpool will depend on their ability to work together.

The show has gone down a treat with BBC viewers, with Martin and Adelayo receiving widespread praise for their performances.

The series is concludes tomorrow night, with all five episodes currently available to binge on BBC iPlayer. Plenty of viewers have already consumed the series in one go, and now they want more!

Viewers want more of The Responder and Martin Freeman!

Some viewers who’ve already binged the series have been calling for the BBC to make a second series!

Many took to Twitter after finishing the show to let their feelings on series two be known.

“Really hope there’s another series of #TheResponder it’s bloody brilliant. And I’m not just biased because it’s set in Liverpool,” one viewer tweeted.

“Best thing we’ve watched in a long time. Don’t wait another 2 years to write the second series – crack on!!” a third told the writer of The Responder, Tony Schumacher, on Twitter.

“#Theresponder Just finished the last episode. Please say there will be a series 2. Martin Freeman was amazing 10/10,” another tweeted.

It’s safe to say that The Responder has been a smash hit for the BBC, with many even comparing it to Line of Duty.

But will there be a second series? Or is The Responder going to be a one-series wonder, with fans forever wishing for more?

As of yet, there has been no official confirmation of a second season being in development. However, it’s not all bad news!

Warren Brown, who plays Raymond Mullen in the show, has said that there are “murmurs” of a second series.

“So often you don’t know how well something’s going to be received, so you don’t know from the off that they’re wanting to do more of a series,” the actor told RadioTimes.com.

“But I think more and more now when an audience reaction has been great for a show, there’s definite scope to do more. So there are murmurs [of a second season], but nothing set in stone.”

He then said that he would “love” to return to do another series.

Only time will tell if the BBC commissions a second season. In the meantime, you can binge The Responder to your heart’s content on BBC iPlayer.

The Responder continues tonight (Tuesday, February 1) at 9pm on BBC One and BBC iPlayer.

Do you want to see a The Responder series 2? Leave us a comment on our Facebook page @EntertainmentDailyFix and let us know!