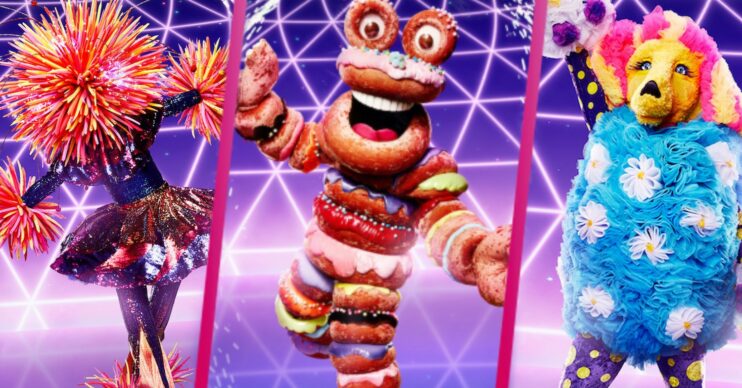 Here we go! Look at this bonkers lot!

The Masked Singer UK has unveiled its batch of new characters for the new series.

One of our favourite shows, it’s on its way back for its third run in the New Year.

And now ITV has unveiled the character that will keep us guessing.

Who will appear in the new series of The Masked Singer?

Hoping to join Queen Bee (Nicola Roberts) and Sausage (Joss Stone) in the exclusive Masked Singer winners’ club, a brand-new cast of 12 celebs will take to the stage.

And we can reveal who they are. Woohoo!

First off there’s Bagpipes, Snow Leopard and, in keeping with the show’s surreal tradition… Chandelier.

And then there’s Doughnuts… almost good enough to eat!

Read more: The Masked Singer UK: Is there a series 3 and when will it be on?

Who is on the panel for this series?

The next batch of characters includes Firework, Lionfish, Mushroom and Panda.

Let’s hope they all fit on stage, or else there won’t be ‘mush room’ for anyone else. Sorry.

And so to this year’s panel of guessers.

Joel Dommett is back as host, and Jonathan Ross, Davina McCall, Mo Gilligan and Rita Ora all return as members of the panel.

Who are the remaining characters?

Ah, we love The Masked Singer.

You can always guarantee some crazy characters, and this year is no different.

In fact, we think they’ve outdone themselves. Seriously.

Read more: Joel Dommett was tricked in a ‘catfish’ scam that led to nude video leak

The final batch of characters includes Poodle, Rockhopper (whatever one of those is), Robobunny (!) and Traffic Cone.

We can’t wait for it to start, and to guess who’s behind the mask(s).

Are you looking forward to seeing The Masked Singer back? Leave us a comment on our Facebook page @EntertainmentDailyFix and let us know.